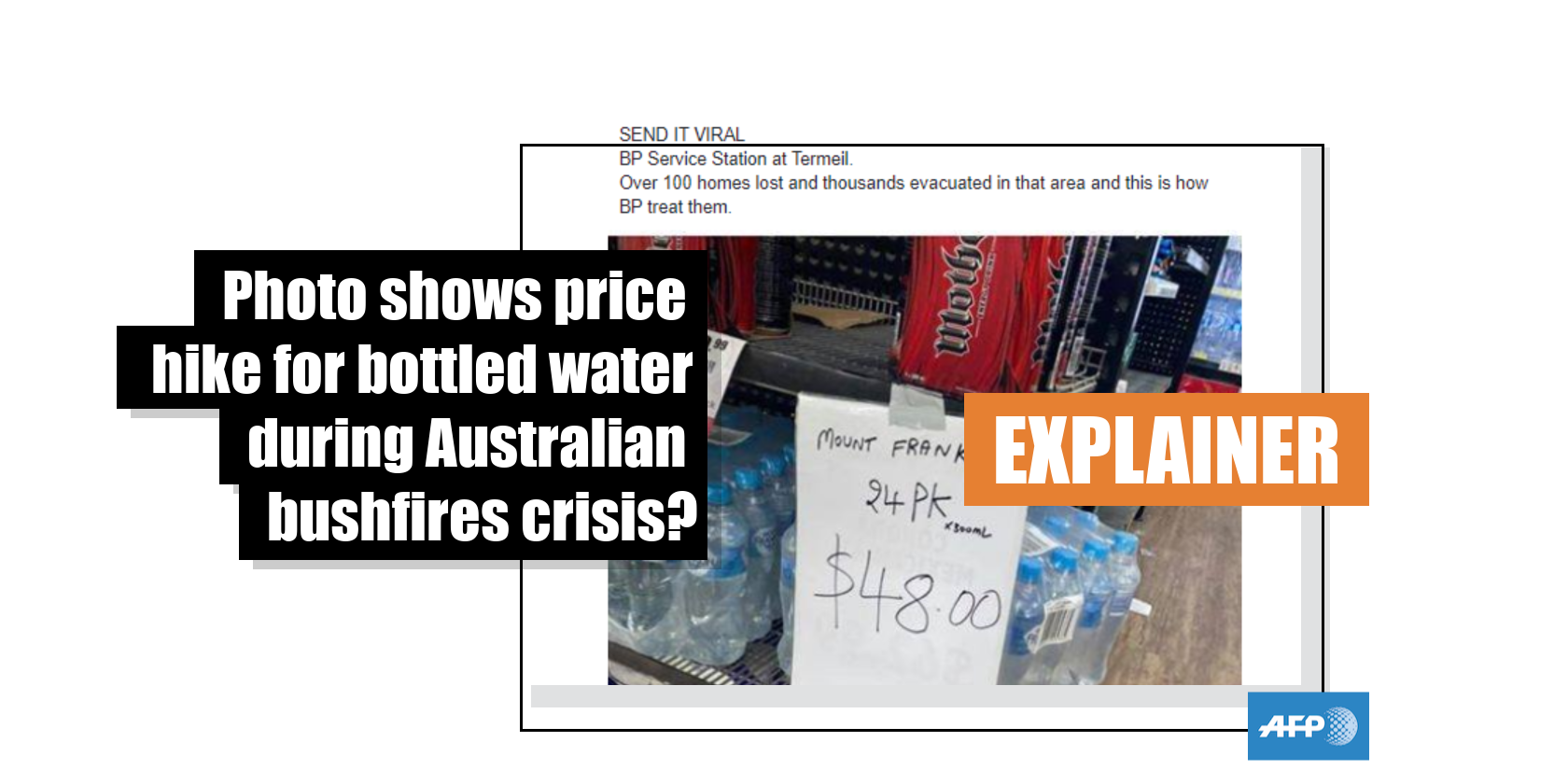 A photo of a case of Mount Franklin water priced at AUD48 (USD33) for a 24-pack of 300ml bottles has been shared thousands of times in multiple posts on Facebook. The posts included a claim the spiked prices were set by a BP petrol station in New South Wales as deadly bushfires raged in Australia. But a spokesperson for the petrol station told AFP the product's price tag and description contained significant errors; Mount Franklin told AFP it does not sell water in 300ml bottles.

The post's caption states: “SEND IT VIRAL BP Service Station at Termeil. Over 100 homes lost and thousands evacuated in that area and this is how BP treat them.”

The photo in the post was embedded in another Facebook post, which states in its caption: “24 x 300ml Water is well priced at Termeil petrol station, get it before it goes”.

The BP petrol station that sold the bottles of Mount Franklin, a Coca-Cola Amatil-owned brand, is located in Termeil along the Princes Highway. 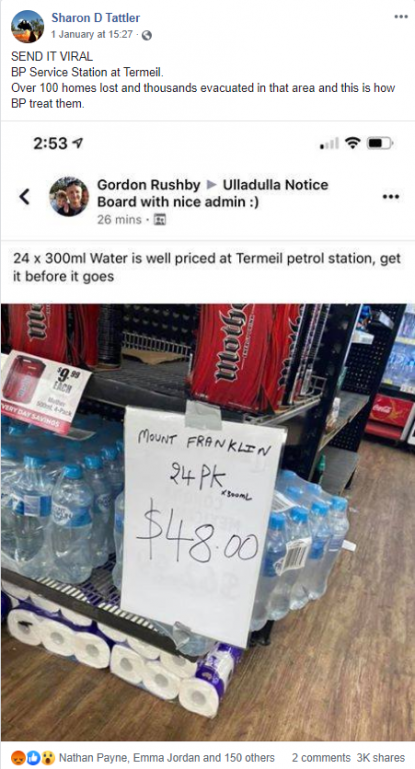 The photo was shared online as Termeil, a village located on the southeastern coast of the Australian state of New South Wales, was hit by a bushfire that burned more than 260,000 hectares in the region as of January 3, according to the New South Wales Rural Fire Service (NSW RFS).

Below is a screenshot of the NSW RFS warning for the Termeil area on January 3: 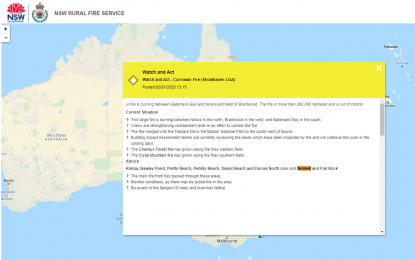 Wildfires in Australia have killed at least 24 people, destroyed more than 1,500 homes and burned more than eight million hectares of land since September 2019, in an unusually early and intense fire season, AFP reported here on January 6, 2020.

The photo was shared in several other Facebook posts seen here, here, here and here with a similar claim.

A spokesperson for the BP petrol station told AFP the sign pictured in the posts was written in error by a junior staff member.

The spokesperson added the sign was hung on New Year's Day due to a “silly human error.”

“I would like to inform you that it was big misunderstanding that spread so fast negatively. My junior employee displayed water of 24pk 300ml Mount Franklin for $48. He forgot to put 2 times and also 600ml,” the spokesperson wrote in an email to AFP on January 2. “It was crazy busy yesterday with lots of people queuing up. It was a typo error and a silly human error.”

The spokesperson also said the wrong price tag was taken down as soon as “we realised that there was lot of chaos on this” and a correct price tag was displayed.

“It's so heartbreaking when people call you greedy when you are actually trying to help in this difficult time. On behalf of my employee I'm taking responsibility,” the spokesperson said.

Below is a photo provided by the spokesperson showing the updated prices: 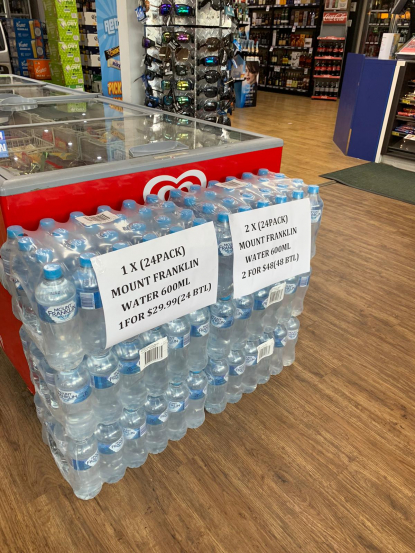 The photo sent by the store owner shows corresponding interior decor to those posted to the petrol station’s website, including a blue counter, a freezer featuring the logo of Australian ice-cream brand Streets and wooden flooring with pattern that runs parallel to the counter.

Below is a screenshot comparison of the photo provided by the petrol station spokesperson via email (top left) and three images of the store posted to the station’s website with corresponding features circled in red by AFP: 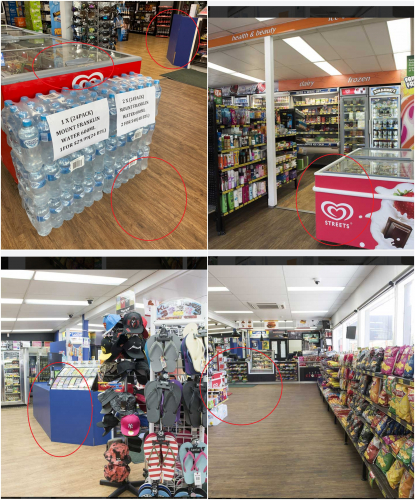 The petrol station spokesperson also emailed AFP a second image, which shows a billing and delivery note addressing BP Termeil. The owner said the page shows all the Mount Franklin products sold at the store.

Below is a screenshot of the invoice: 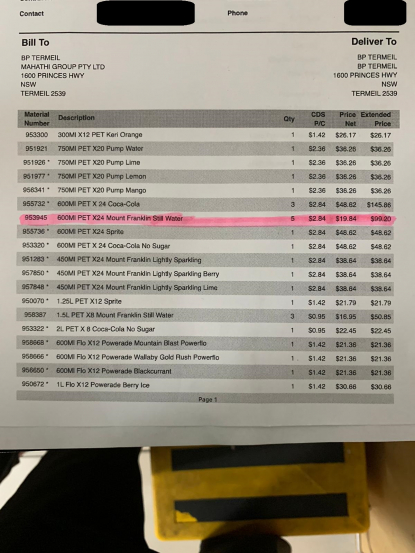 All of the above products are listed on the Mount Franklin website as of January 6, 2019. The site does not list any water for sale in 300ml bottles.

The erroneous pricing that caused outrage online is far higher than market prices for similar bottle sizes and cases.

For instance, supermarket chains Woolworths and Coles sell a 20-pack of 500 ml Mount Franklin bottled water at around $9, and office supplies chain Officeworks prices a 24-pack of the brand’s 400 ml water bottles at around $25.