An image that shows a purported screenshot of an apology on The Australian website over  a report about “a link between the Melbourne COVID-19 oubreak and the Black Lives Matter protest” has been shared multiple times on Facebook. The claim is false; the reporter who bylined the original story refuted the claims on Twitter, calling it “fake”; a keyword search on the newspaper's website also yielded no results. 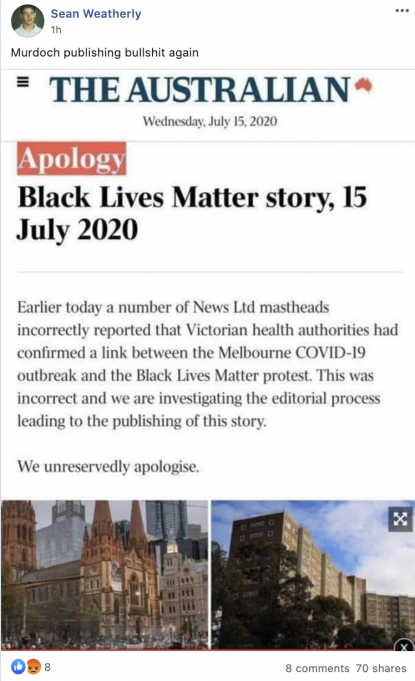 “Earlier today a number of News Ltd mastheads incorrectly reported that Victorian health authorities had confirmed a link between the Melbourne COVID-19 outbreak and the Black Lives Matter protest. This was incorrect and we are investigating the editorial process leading to the publishing of this story. / We unreservedly apologise.”

The image refers to this July 15, 2020 article by The Australian, which claims a cluster of COVID-19 cases in Melbourne is linked to Black Lives Matter protests in the area. 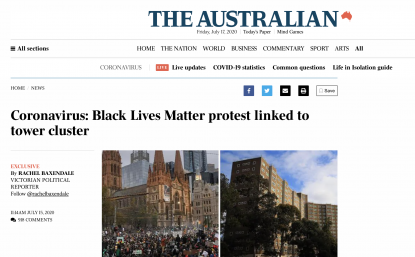 Rachel Baxendale, the reporter who bylined the article, tweeted on July 15, 2020 that no such apology was issued.

“There is a photoshopped tweet circulating which purports to be an apology from The @australian about this story. The apology is fake. The story was meticulously researched and carefully written and the facts within it have not been disputed by DHHS,” the tweet reads.

Screenshot of the tweet posted by The Australian reporter.

A keyword search for the apology on The Australian website also yielded no results.

According to this report by The Guardian and this by the media publication Mumbrella, News Limited rebranded to News Corp Australia in June 2013.

News Corp Australia did not immediately respond to a request for comment.