Skip to main content
Passengers of the Diamond Princess cruise ship, who were quarantined due to fear of the new COVID-19 coronavirus, look on from the deck of the ferry docked at the Daikaku Pier Cruise Terminal in Yokohama port on February 16, 2020. (AFP / Behrouz Mehri)

Multiple news articles and social media posts published in February 2020 claimed that an Australian couple who were quarantined on a cruise ship off the coast of Japan due to the novel coronavirus outbreak had wine delivered to them by a drone. The claim is false; the couple later told an Australian radio station that their social media posts about the wine delivery were a "prank".

The claim was published by media organisations worldwide, including in this article by Hong Kong-based viral site 9GAG on February 13, 2020.

The article reads in part: "Jan and Dave Binskin, from Queensland, have documented their journey of boredom and booze while stranded on the Diamond Princess ship off the coast of Tokyo for the past week.

"The couple then reached out to the Naked Wine Club and — much to their delight — received two bottles of Pinot Noir that was delivered to their cabin door by drone." 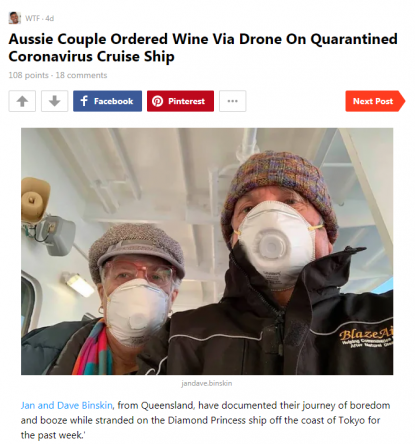 A screenshot of the 9GAG report

The Binskins were quarantined on the Diamond Princess cruise ship off the coast of Japan at the time. As of February 17, 2020, at least 355 people on board have been infected with the coronavirus despite passengers being confined to their cabins during a 14-day quarantine, as reported in this AFP article.

A similar claim about the wine delivery was made in this article by the MailOnline, the website for British newspaper The Daily Mail.

The claim is false; the couple told a national radio programme that the story was a joke.

In an interview published here by Australia’s Radio National on February 17, 2020, Jan Binskin said the story was a “just an upbeat, positive prank” and that the couple only drank wine that was already on the ship.

“We got it from our cabin steward,” Binskin can be heard saying at the 11-minute mark in the clip, after she was asked about the wine delivery. “We just couldn’t believe that. Because [nobody] ever checked [it], and all of a sudden we knew it was on the news. It just came off our personal Facebook. It was just an upbeat, positive prank...it was like "gotcha!"'

The couple published this photo of a wine bottle and two glasses on Facebook on February 9.

The confusion arose after the couple posted this image of the wine on their shared Facebook page on February 7.  The post's caption states: "Naked Wine Club your [sic] incredible just got the First Drop Thank God For Drones the Japanese Coast Guard did not know what the Fuck was going on."