Skip to main content
Participants hold placards as they take part in a demonstration demanding the government take immediate action against climate change in Sydney on January 10, 2020, in the wake of deadly bushfires (MOHAMMAD FAROOQ / AFP)

A purported screenshot from the website of the Australian Greens party has been shared hundreds of times in multiple posts on Facebook and Twitter alongside a claim that it shows the party altered its policy to support backburning in November 2019, just as deadly bushfires intensified in Australia. The claim is misleading; digital archives show the Greens have maintained supportive policy positions on hazard reduction burns and backburning on their website since at least March 2019, months before the bushfires began in September 2019.

The purported screenshot was published in a Facebook post here on January 1, 2020. It has been shared almost 200 times.

Text superimposed on the image states: “The Greens have modified their bushfire risk management policy” and “Why? Could it be because their old policy is being hammered right now?”

The image also includes a legitimate URL to the website of the Australian Greens, an Australian political party widely referred to as the Greens.

The post’s caption states: “For the twits that think the greens party have always believed in back burning. When the fires started in November 2019 they quickly changed thier policy. Like cowards”. 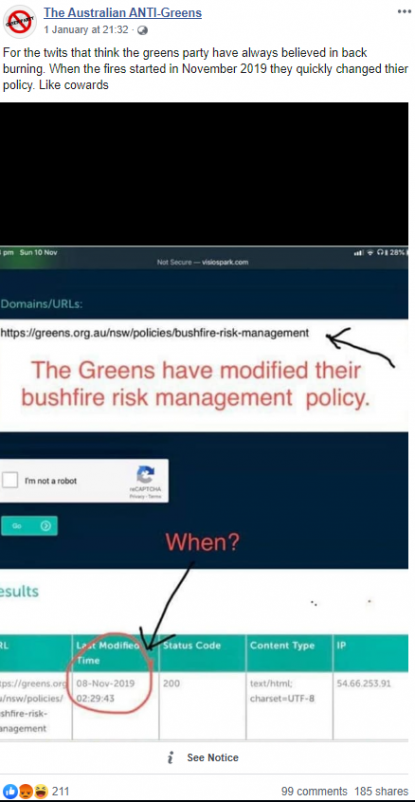 Similar claims about the Greens’ opposition to backburning, which is the intentional burning of vegetation to create a buffer to slow an approaching fire, have also been shared thousands of times here, here, here, here, here and here on Twitter and sparked a debate here on Reddit.

The claim is misleading; digital archives show the Greens have maintained supportive policy positions on hazard reduction burns and backburning on their website since at least March 2019.

The URL included at the top of the misleading screenshot links to a page on the Greens’ website titled “Bushfire Risk Management.”

“3. Hazard reduction, including manual, mechanical and hazard reduction burning activities should be strategically planned to protect the community and vulnerable assets while minimising the adverse impacts of these activities on the environment;

“5. Strict controls are required to reduce the amount of rural burning that is not required for essential asset protection;

“6. Prescribed burning is only one method of fuel management and should be considered in the context of other available options and the management objectives of the land in question;

Below is a screenshot of the web page with relevant terms circled in red by AFP: 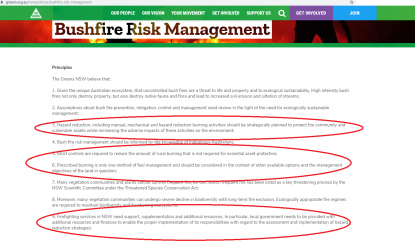 While the misleading screenshot claims the Greens’ Bushfire Risk Management policy page was modified on November 8, 2019, just as an unprecedented number of bushfires scorched eastern Australia, AFP found that the page has in fact remained the same since early 2019.

The exact same content was also recorded by archive.today, a separate archive site, on November 12, 2019.

The Greens have adamantly defended themselves since allegations emerged online during 2019’s unusually early and intense bushfire season, as seen in these screenshots posted by the Greens NSW on November 13, 2019.

“People who make these claims can never point to a specific instance where a Greens state member has said ‘we don’t support hazard reduction, or we’re going to make it more difficult for you'," the Greens leader said.

Di Natale also stated that he believed false claims about the Greens’ stance regarding the bushfires were a “coordinated, complex and sustained” campaign, the Sydney Morning Herald reported here on January 8, 2020.

The Greens tweeted about similar misleading claims here on December 9, 2019: “The conservative media has been running misinformation about bushfires and sadly many people have bought it hook, line and sinker. We support hazard reduction burns but it’s getting harder to do in winter because of the climate emergency.”

The conservative media has been running misinformation about bushfires and sadly many people have bought it hook, line and sinker. We support hazard reduction burns but it’s getting harder to do in winter because of the climate emergency. Here's the facts: https://t.co/X5dAIHzITD

The tweet linked to a Greens web page titled “Bushfires, Hazard Reduction and Backburning”, which states in part: “The Australian Greens support hazard reduction burns and backburning to reduce the impact of bushfires when guided by the best scientific, ecological and emergency service expertise.

"Climate change has left forests and grasslands drier, which means the bushfire season has started earlier and will likely last longer. Higher temperatures and drier conditions have made the window for hazard reduction shorter.”

"It’s a valuable tool, it’s not a panaceia,"

In a report titled “Is Fuel Reduction Burning the Answer?”, the Australian government’s Science, Technology, Environment and Resources Group noted that “While fuel reduction burning is the principal means to reduce the risks of bushfire, under extreme conditions bushfires can burn across land with very low fuel loads, which would have been halted under milder conditions.”

The article adds that in order for fuel reduction burns to be effective, “they need to be designed to be applied to specific vegetation types and implemented by properly trained and resourced staff.”

Experts also note that weather plays a major factor in the effectiveness of hazard reduction burns.

“Burning regimes are planned in advance with the knowledge that some fuel reduction burns may not proceed due to poor weather,” the government’s report states. “Therefore the difficulties in carrying out fuel reduction burning because of the need to burn in optimal conditions should not be used as an excuse not to burn.”

Misleading claims about backburning and the Greens’ position on the matter have also been debunked here by the Guardian and here by the Australian Associated Press.