Skip to main content
A man holds a wombat at a zoo near Australia's Phillip Island on September 14, 2006 (Paul Crock / AFP)

Photos of wombats have been shared hundreds of thousands of times in multiple Facebook, Twitter, Instagram and Reddit posts alongside a claim that the marsupials shepherd animals into their burrows in a bid to protect them from bushfires in Australia. The fires have killed as many as one billion animals in Australia since September 2019. The claim is misleading; experts say animals have long taken refuge in wombats’ burrows, but they are not invited by the marsupials. 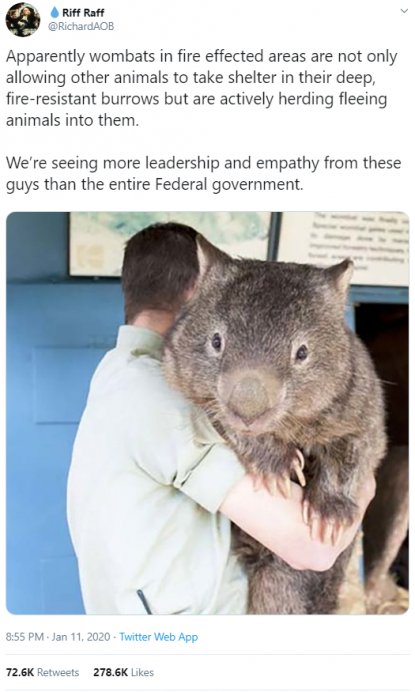 The post reads: “Apparently wombats in fire effected areas are not only allowing other animals to take shelter in their deep,  fire-resistant burrows but are actively herding fleeing animals into them. We’re seeing more leadership and empathy from these guys than the entire Federal government.”

According to the New South Wales Office of Environment and Heritage, “wombats are stout, sturdy marsupials native to Australia.”

Deadly bushfires have killed at least 28 people and an estimated one billion animals across Australia since September 2019, as reported here by AFP on January 15, 2020.

University of Adelaide ecologist Dr. Michael Swinbourne told AFP via email on January 16, 2020: “Wombats will share their burrows with other animals at the same time. I wouldn't say that wombats are "happy" about sharing with other animals, but they will "tolerate" them as long as they don't disturb the wombat too much.

“Wombats generally don't like other wombats sharing their burrows, but they will under some circumstances. In general they will sometimes share with closely related wombats, but not with "strangers".

“They also share with a wide range of other animals, such as reptiles, rodents, rabbits, echidnas, wallabies and even birds and koalas. We have images of penguins sheltering in a wombat burrow to escape the attention of a sea eagle.”

Below are four photographs provided by Dr. Swinbourne that show animals such as a) southern hairy-nosed wombat, b) little penguin, c) black-footed rock wallaby and d) sea eagle spotted near a wombat burrow: 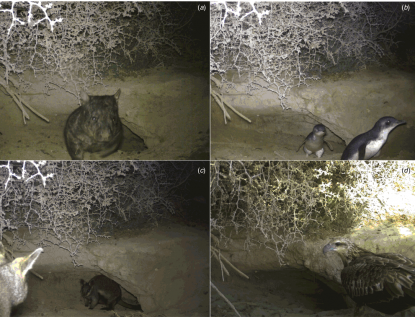 In a research article titled “Interspecies co-use of southern hairy-nosed wombat (Lasiorhinus latifrons) burrows”, which was published in the scientific journal Australian Mammalogy in 2016, scientists said, in part:

A separate academic paper titled “Who utilises bare-nosed wombat burrows?", which was published in the Australian Zoologist journal in 2018, states in part:

“The species observed utilising wombat burrows included wombats, rabbits, macropods, possums, murids, foxes, cats and birds. The utilisation of wombat burrows by these species included entry into the burrow for shelter and hunting, and exploitation of the burrow entrance and spoil for foraging and potentially geophagic purposes.”

Animals such as koalas and rabbits have previously been seen in wombat burrows, including this April 2019 recording. The video was captured by camera traps laid by a group of science students from the University of Melbourne in the Australian state of Victoria.

Other unexpected creatures, such as butterflies, have also been found fluttering in wombat burrows, as seen in this January 2020 video:

How are butterflies surviving the #AustralianFires? Julie Favell was putting out water for wildlife that survived the fires when she witnessed common brown butterflies (Heteronympha merope) fluttering in a moist wombat hole.

These animals, however, have not been invited in by wombats, experts say.

Dr. Swinbourne says: “Wombats definitely do not shepherd other animals into their burrows. It is possible that this idea arose because someone saw an animal either follow a wombat into its burrow, or the other animals went in first followed by the wombats.

“Wombats generally are fairly tolerant of other animals. This may be because they have few real predators so they don't feel threatened by most animals, especially those that are small enough to fit in their burrows. They do interact with other animals on occasion.”

When asked if wombats would actively invite other animals in their homes, Professor Michael Clarke, a professor of zoology at La Trobe University, provided a similar comment: “Very unlikely, given their solitary disposition.”

New South Wales Office of Environment and Heritage said despite their benevolence, wombats have set certain “ground rules” for their uninvited guests: “Although wombats will share burrows, they are possessive about their particular feeding grounds. They mark out these areas by leaving scent trails and droppings around the boundaries. If an intruding wombat moves in on their territory, it will be discouraged through a series of snorts, screeches and even a chase.”

Although unintentional, the refuge wombats provide for other animals has proved crucial in protecting them against raging bushfires.

The University of Melbourne published this April 2019 report on a rare sighting of koalas and rabbits near a wombat burrow, which reads in part: “Burrows provide protection from the elements and predators -- they are a safe place for wombats to rest and provide a comfortable temperature.

“Wombats use multiple burrows and spend about two thirds of their lives underground, which helps them conserve energy.

“Wombat burrows can be more than just a hole in the ground. They are often complex, can contain more than one chamber, and are periodically ‘renovated’.

“While wombats will use a number of different burrows, normally there will only be one occupant at any given time, as wombats are solitary creature.”

Dr. Swinbourne added: “Wombat burrows can provide protection from predators, from fires, or just from the weather. The daytime temperatures in inland Australia (the home of southern hairy-nosed wombats) can commonly reach up to 45C and there are few trees for shade, so getting out of the sun is important.

“Wombat burrows can be very resistant to fire, but it would depend on the severity of the fire. Small fires would not worry a wombat in its burrow, but a really large fire like some of the ones on the east coast might cause problems.”

Wombat burrows are large enough to fit many animals - sometimes more than one of them - and even a grown man.

“Wombat burrows can be quite deep and long. It depends on soil etc, but they can be up to 3m deep and 20m in length,” Dr. Swinbourne told AFP.

“Burrows of the southern hairy-nosed wombat (there are three species of wombat) are usually grouped together into warrens, which can be huge -- as big as a football field and containing up to 50 burrows.”

This BBC video published in May 2008 illustrates how a wombat burrow can be wide and deep enough for the show host to climb into.

Wombats’ burrows may not be the only option for animals in need, but definitely the most accessible and practical one, according to Dr. Swinbourne.

“There are a few other burrowing animals in Australia, but most of them are quite small (rodent size) so most other animals wouldn't fit inside. Animals like echindas also burrow, but their burrows are also small and wouldn't have room for other animals,” he said.

“Unfortunately, the animals other than wombats that build the largest warrens - bettongs and bilbies - are almost extinct because of human persecution and introduced predators.”

The Commonwealth Scientific and Industrial Research Organisation (CSIRO), Australia’s national science research agency, also issued a clarification about the misleading claim here on Facebook, here on Instagram and here on Twitter on January 15, 2020, saying wombats are “tolerating”, rather than “sharing” or inviting other animals in their burrows.