Multiple Facebook posts shared thousands of times claim the last dam built in Australia was in 1984 despite rapid population growth, fuelling the country’s water shortages. The claim is false; Australia has continued to build dams post-1984. 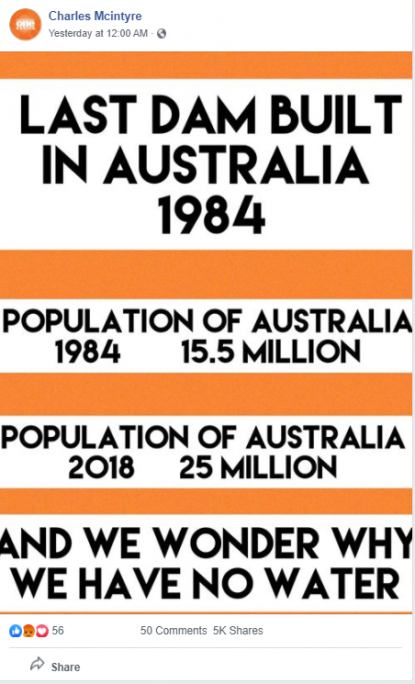 The claim is false; Australia has built several dams since 1984.

According to the Australian National Committee on Large Dams (ANCOLD)’s "register of large dams", the newest Dam to be "completed" in the country is the Cotter Dam in Australian Capital Territory. This dam was originally built back in 1915, but was expanded to allow a larger water supply in 2013.

Wyaralong Dam in south-east Queensland is also a newer build, completed in 2011, with a capacity of 102,883 megalitres. SEQ Water, a statutory water services authority of the Government of Queensland, explains here that the dam is “not currently used for water supply, but could be in the future.”

The Paradise Dam, built in 2005 to a capacity of 300,000 megalitres, is also situated in Queensland. The dam’s primary function is to store water for irrigation and urban use.

The full list of dams built in Australia since 1857, compiled by ANCOLD, can be found here.

AFP Fact Check has also debunked another misleading post here, which claims Australia has not built a power plant or a major water project since the country’s population doubled.