It claims Bulgarian authorities "deliberately" flooded the Ivaylovgrad dam near the Turkish-Greek border "to make crossing conditions harder for migrants wishing to gain access to the EU". 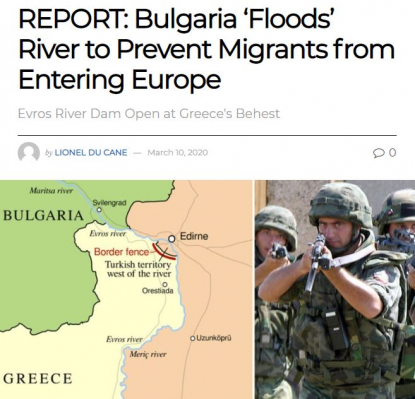 A screenshot of the claims published in an article, taken on March 13, 2020

The story was widely shared on social media, including on Facebook pages supporting far right groups, such as the anti-Islamic Pegida movement (here, here and here).

Many Facebook users commenting on the posts expressed anti-immigrant sentiment. 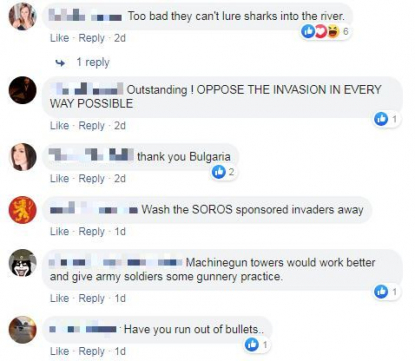 The Ivaylovgrad dam is around 30 kilometres from the Turkish-Greek border, where thousands of migrants have arrived since Turkey's government announced last month that the country -- a non-EU member -- would no longer stop migrants from trying to cross through to Europe.

Contacted by AFP, Ivan Dimov, an advisor to Bulgaria's foreign minister Ekaterina Zaharieva, denounced the claims. "Bulgaria was not asked by Greece to flood the Ivaylovgrad dam", he said.

"Nobody has allowed such a thing," he said. "Every month, I sign a plan on water use for the 52 major dams in the country" which is "valid through the following month".

Many articles and social media posts purport to show a photograph of water crashing down from the dam, but AFP traced the image and found it has been circulating online since at least 2015 (see here). 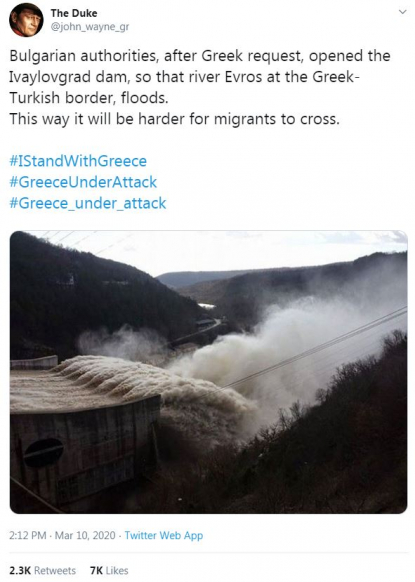 A screenshot of a tweet sharing the claims, taken on March 13, 2020

The image used in the tweet below is a screenshot of a video published on a Greek site in July 2018.

The environment and water ministry's water level measures show that the Ivaylovgrad dam was not overflowing at the time it was allegedly flooded. The misleading news articles claim the dam was opened on March 9, but official reports show there was only a slight increase in water levels at that time.

Satellite images from March 8 and 11 -- the days before and after the dam was supposedly opened -- also show that the dam was not overflowing at the time the claims surfaced.

A small sand bank near the dam and situated 1.5 kilometres from the Turkish-Greek border is still visible on both days, though slightly less on March 11. However, an AFP photographer on the ground reported heavy rainfall at the time. 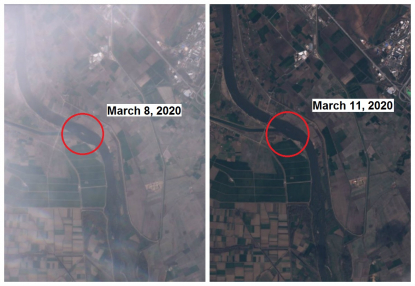 Older satellite images show that the sand bank shrank in a more significant manner between March 6 and March 8, and that this sand bank varies regularly -- and greatly -- depending on the river's levels.

Environment Minister Emil Dimitrov told Bulgarian TV that opening the Ivaylovgrad dam would lead to a rise in water levels lasting only a few hours. He said he did not think such a rise would prevent migrants from crossing the river.

Greece could have flooded a dam it owns, also situated on the Arda river, without help from Bulgaria, he said.

AFP contacted the Greek government for comment but has not yet received a reply.