Are 76 percent of young Kenyans really gamblers? A look at where that number comes from

When Kenya’s Interior Minister Fred Matiang’i announced tougher measures on the betting industry earlier this month, he cited -- as evidence that the country has a serious problem with gambling -- a claim that 76 percent of young Kenyans are involved in the practice, ‘leading on this continent’. In fact, the figure comes from a survey that only looked at six countries.

Matiang’i cited the figure at a press conference on April 1, during which he announced that gambling companies will have their permits revoked if they do not provide proof by July 1 that they have paid their taxes.

The minister signalled that he wanted the Kenyan betting sector to face stricter regulations, particularly since so many young people in the country gamble.

He went on to ask: “What kind of country are we building? Are we raising our children and telling them, ‘Just do nothing with your life, just go around betting and become a millionaire and live well’? Is that the kind of thing that we’re telling our country and our children?”

Where did the 76 percent figure come from?

Matiang’i did not cite his source for the 76 percent claim, and many news reports simply quoted him giving the figure without asking where it came from.

Some web users queried the source of the information. 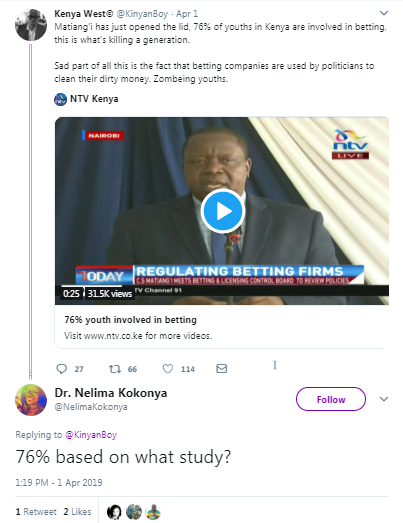 We decided to track down its source.

The 76 percent figure appears to have come from a March 2017 survey by GeoPoll, a US-based research company.

The survey looked at betting among young people in six African countries -- Ghana, South Africa, Nigeria, Tanzania and Uganda as well as Kenya -- and indeed found that 76 percent of Kenyan respondents said they had gambled.

The survey sampled 3,879 respondents aged between 17 and 35 across the six countries -- of which 1,130 were in Kenya, GeoPoll marketing director Roxana Elliott told AFP via email.

So is it fair to say that 76 percent of young Kenyans gamble?

Not quite. Matiang’i, speaking at the press conference, suggested that 76 percent of young Kenyans were currently involved in gambling.

The study by GeoPoll clearly states that respondents were asked if they had gambled in the past. It would be more accurate to say that 76 percent of young Kenyans say they have gambled at some point, according to the survey.

Having said that, of the Kenyans who said they had gambled at some point, more than half said they gambled once a week. 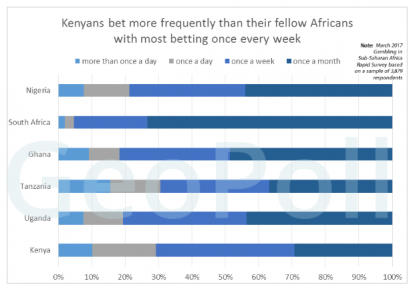 A screenshot taken on April 18, 2019 showing a chart used in the GeoPoll survey

As per this chart included in the study, that’s a higher rate than in any of the other countries where people were surveyed.

The minister said that Kenya was “leading on this continent on the population of our young people involved in betting”. This is not necessarily true, as the survey only looked at six countries. It’s still possible that another African country may have higher gambling rates.

But it is fair to say that young Kenyans reported higher gambling rates than in any of the other countries surveyed.

Can we be sure that the survey data accurately reflects the reality of gambling habits among young Kenyans?

No surveying method is perfect. GeoPoll collects information from people using a mobile phone app, and the company says on its website that it “recognizes that the mobile population does not always perfectly match the national population”.

Kenya has some of the highest rates of mobile phone use in Africa -- in December, the Communications Authority of Kenya announced that the country now has more SIM cards than people. That suggests that surveying people via mobile phone is a fairly effective method of surveying people in Kenya.

But even after you narrow down the pool of people answering questions to those who own mobile phones, there’s still the question of which people to pick within that pool.

On its Frequently Asked Questions page, GeoPoll details how it tries to choose a group of respondents that is broadly representative of the wider population, by matching the demographics of the survey group to census data.  Kenya’s last census was in 2009 -- it is due to hold the next one in August 2019. So we should bear in mind that the data used as a basis for selecting participants in the 2017 survey would have already been rather out of date.

Surveys are never going to perfectly reflect reality, so it’s better not to cite figures that have come from surveys as if they were facts. That said, the GeoPoll survey appears to be the most recent and most thorough survey available on the subject of youth gambling in sub-Saharan Africa.

Why do so many young Kenyans gamble?

Online data reflects a widespread love of betting in Kenya. According to an annual report for 2019 by Hootsuite and We Are Social, 11 of the top 20 Google search queries in Kenya last year were directly related to betting. 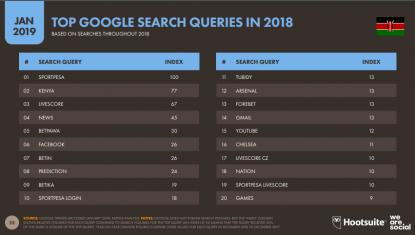 Top Google searches in Kenya in 2018, as listed by an annual report by Hootsuite and Are We Social

SportPesa, a Kenyan sports betting platform, currently ranks as the country’s 11th most popular website according to the website ranking site Alexa.

Many commenters responding to social media posts about Matiang’i’s comments suggested that the reason so many young Kenyans gamble is that so many of them are unable to find jobs.

Aloyce Omondi, an official at the Association of Gaming Operators Kenya, backs this theory.

“I can tell you it is because of unemployment,” he said of the popularity of gambling among young Kenyans. “Initially gambling was a leisure activity for the rich, but currently young people are viewing it as a way to make money quickly and become millionaires,” he said.

As Africa Check explained in October, talking about youth unemployment in Kenya is a tricky issue because, while few would deny that many young Kenyans are out of work, various youth unemployment rates are cited by different publications.

The International Labor Organization (ILO) estimated that youth unemployment in Kenya stood at 26.2 percent in 2018 compared to an overall unemployment rate of 11.5 percent. A 2017 report by the British Council also estimated that 500,000 to 800,000 youths were annually entering a job market that is struggling to absorb them.

It’s worth bearing in mind, however, that Kenya was not the only country surveyed which is struggling with high levels of youth unemployment -- South Africa’s youth unemployment rate was listed as an eyewatering 53.8 percent by the ILO.

Omondi suggested that another reason for the high gambling rates in Kenya was that placing a bet is particularly easy in the country due to loose regulations up until now. Mobile gambling has taken off as an industry without changes in the regulation keeping pace, he told AFP.

“There is a lacunae in the law in regards to mobile gambling. If you have a phone and internet you can easily go online and gamble with no regulations at all. But there is need to regulate the industry,” he told AFP by phone.

Like others, Dr Ken Ouko, a sociologist at the University of Nairobi, drew a link between high youth gambling rates and “the alarmingly high levels of youth idleness arising from either joblessness or transitory limbo as they wait to join colleges and universities”.

“In Kenya the advertising frenzy by betting firms has also contributed to the trapping of the youth’s collective imagination,” he told AFP.