Skip to main content
Bill Gates gives a child a rotavirus vaccine against diarrhea at the Ahentia Health Centre in Ghana on March 26, 2013. The Microsoft founder has been the subject of numerous conspiracy theories surrounding vaccines since the start of the coronavirus pandemic. (Photo by PIUS UTOMI EKPEI / AFP)

A YouTube video featuring Harvard law professor emeritus Alan Dershowitz has been viewed thousands of times in posts that claim it exposes a plan by American billionaire philanthropist Bill Gates to forcefully vaccinate and “depopulate Africans” amid the novel coronavirus pandemic. But this is false; Dershowitz was talking about the people of New York while answering questions about the constitutionality of mandatory vaccination under US law. He made no reference to Africans, Gates or depopulation. 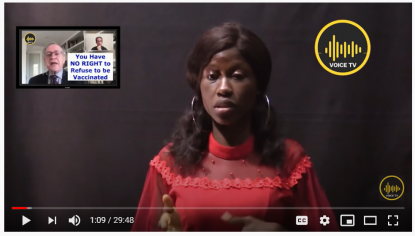 The 30-minute video features several clips of people condemning the purported forceful vaccination, including one that shows Palma commenting on an interview between Professor Alan Dershowitz and Jason Goodman, host of the web show "Crowdsource the Truth". 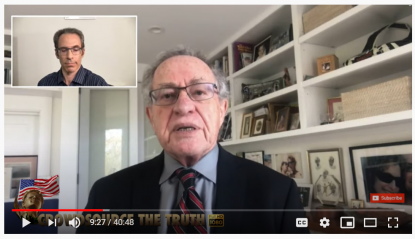 Screenshot of Goodman’s interview with Dershowitz, taken on August 7, 2020

"If you refuse to be vaccinated, the state has the power to literally take you to a doctor's office and plunge a needle into your arm if the vaccination is designed to prevent the spreading disease,” Dershowitz is heard saying in the footage.

An interview taken out of context

Palma interprets the statement to mean that Africans will be forcefully vaccinated against their will and accuses Bill Gates of profiting from the exercise.

“I just want to ask what is really happening, Africans?” Palma asks. “Is it that we are not hearing all these messages of all these vaccines being harmful to the African citizens, trying to depopulate the African nation? Well, my question is that this vaccine thing is now a forceful thing and we should be mindful of it.”

But at no point does Dershowitz refer to Africans or even the global population during the interview. The video clip presented by Palma was taken out of context and edited. The US flag and Crowdsource the Truth’s logo in the bottom left corner of the screen were removed from the original footage.

Using the InVID WeVerify tool, AFP Fact Check ran reverse image searches on keyframes of the video and found the original version of the video on Goodman’s YouTube page, as well as on Crowdsource the Truth’s Twitter feed.

About 20 minutes into the video clip, Goodman asks Dershowitz about the constitutionality of New York Governor Andrew Cuomo shutting down a park during the virus lockdown.

While he explained that US governors have the power to enforce laws but not to make them, Dershowitz also said US citizens have no right to engage in activities capable of jeopardizing public health.

He goes on to say: “The Constitution gives the state the power to compel that and there are cases in the United States Supreme Court.”

At no point in the interview did he mention Africa or Bill Gates.

Dershowitz is well known in the US for standing up for the rights of men accused of rape in high profile cases. The attorney previously defended controversial figures, including O.J. Simpson, Mike Tyson and Jeffrey Epstein, before he was named President Trump’s impeachment defense counsel earlier this year.

Voicetv Nigeria’s footage also features part of a Reuters news report about Africa’s first human trial for a potential COVID-19 vaccine that was rolled out by Oxford University.

While the clip clearly refers to this as a trial, Palma comments: “And some countries in Africa like South Africa, somewhere they started vaccinating their citizens,” Palma said. “I feel Bill Gates wants to make money from this vaccine; Africans, we need to stop this demon called Bill Gates.”

There are currently no vaccines or drugs available to the public proven to prevent or eradicate the novel coronavirus. “To date, there is no specific medicine recommended to prevent or treat the new coronavirus,” the World Health Organization states.

South Africa’s human trial of the Oxford vaccine came after two people, including British microbiologist Elisa Granato, had received injections of the vaccine developed by researchers from the Oxford Vaccine Group and Oxford's Jenner Institute.

Africans and Microsoft founder Bill Gates are common subjects of debates surrounding COVID-19, the disease caused by the novel coronavirus. Africa has recorded more than one million coronavirus cases including 23,592 deaths, according to an AFP tally as of August 11, 2020.

Online posts warning Africans of the purported harm in COVID-19 vaccines, conspiracy theorists accusing Gates of plotting to reduce the global population through deadly vaccines, and other scandals involving Western doctors effectively using black people as guinea pigs, have all been part of waves of misinformation in the race to find a vaccine for the novel coronavirus.