‘Allahu Akbar’ shouted at a Trump rally? No, it's a doctored video

A video of Donald Trump rally that has been viewed nearly a million times and shared tens of thousands of times on Facebook, Twitter, and YouTube purports to show an audience member shouting “Allahu Akbar”, prompting a security scare. But the video has been doctored to add these words; “Allahu Akbar” cannot be heard in news footage of the March 2016 incident, which happened before Trump became US president.

The misleading 41-second video was shared in this Facebook post published August 18, 2018, where it has been viewed more than 870,000 times.

It shows Trump speaking at a rally then stopping abruptly and being surrounded by security after a voice is heard on the audio track saying the Arabic phrase “Allahu Akbar” -- or “God is great” in Arabic.

Translated to English, the post’s Hindi-language caption says: “Look at the fear created by the slogan Allahu Akbar... Trump was giving a speech and someone quietly said Allahu Akbar and look at what happened afterwards.”

Below is a screenshot of the misleading post, which has been shared more than 23,000 times: 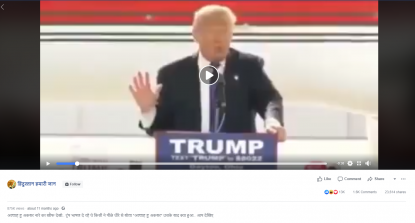 The same video has been shared with a similar claim on Twitter here, YouTube here and in other Facebook posts viewed tens of thousands of times, for example this one published July 12, 2019.

But the claim is false; the video shows a March 12, 2016 incident at a rally in Ohio when Trump was campaigning to be president; in multiple videos of the incident, no one can be heard saying "Allahu Akbar".

A Google reverse image search using keyframes taken from the misleading video led to matching footage of the incident published by US broadcaster ABC News on March 12, 2016 on its verified YouTube channel here.

The caption says: “Secret Service agents needed to join Donald Trump on stage during his rally in Ohio on Saturday, only a day after he canceled an event over safety concerns.”

The words “Allahu Akbar” cannot be heard in the video, which is embedded below:

Below is an image comparing screenshots from the video in the misleading Facebook post (L) and from the ABC News video (R): 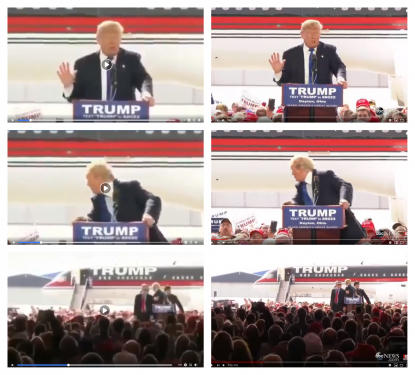 The March 2016 incident was also reported by other international media, for example here by NBC news and here on the BBC news website.

A different video of the entire rally, which is 1 hour 20 minutes long, was also published here on C-Span on March 12, 2016.

At 53:30 in that video, Trump is surrounded by his security, but the words “Allahu Akbar” are not heard in the clip.

Another video of that moment at the event in Ohio, filmed from a different angle and uploaded here on YouTube on March 12, 2016, also does not contain the words “Allahu Akbar”. It is embedded below:

An AFP photograph of the Secret Service surrounding then-candidate Trump onstage at the March 12, 2016 rally can be seen here.

The caption of the AFP photograph says: "Secret Service swarms around Republican Presidential candidate Donald Trump after a bottle was thrown on stage at a Campaign Rally on March 12, 2016 in Vandalia, Ohio. Today was the first rally after violence broke out in a Trump Rally in Chicago yesterday which canceled the rally."

The intruder at the event who prompted the security move was later identified as Thomas Dimassimo. He was charged with disorderly conduct by the authorities, according to this NBC news report.

He was also fined $250 USD and put on one year of probation, which was terminated in November 2016.

Trump on March 13, 2016, in this tweet, referred to the intruder as a member of the Islamic State group. However, the charge was denied by Dimassimo.