All crime legal in Hong Kong for 12 hours? No, the 'emergency broadcast' is fictional

Multiple posts shared hundreds of times on Facebook and Twitter warn of an upcoming 12-hour period in Hong Kong when “any and all crime, including murder, will be legal”. But the text of the supposed “emergency broadcast” is fictional; it is nearly identical to the wording of an announcement featured in 2013 American horror film “The Purge”.

An image containing a lengthy warning message was published in this Facebook post dated July 23, 2019, which has been shared more than 600 times.

“This is your emergency broadcast system announcing the commencement of the Annual Purge sanctioned by the Hong Kong Government,” says one line of text in the image.

Lower down, the message also says: “Commencing at the siren, any and all crime, including murder, will be legal for 12 continuous hours.”

The same text has been shared repeatedly on Facebook and Twitter in July 2019 alongside other similar warning messages written in English and Filipino, for example here and here.

There is no indication given that the posts are satirical or not to be taken seriously. 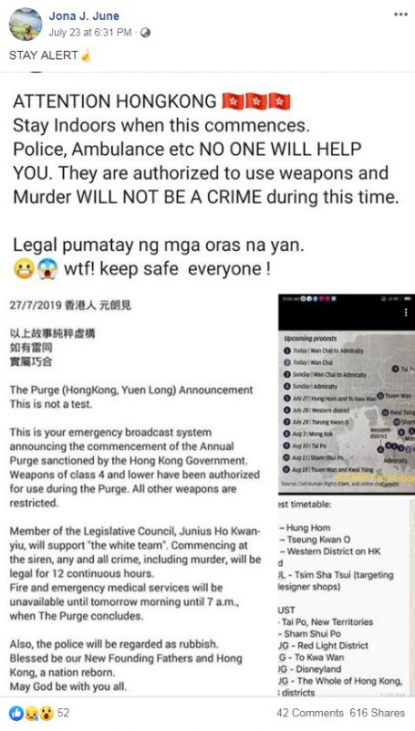 There are around 184,000 Filipino citizens living in Hong Kong, according to this government website.

The semi-autonomous southern Chinese city has seen widespread protests and violent clashes between demonstrators and police during the summer of 2019.

Here is a recent AFP article about the unrest, which was triggered by opposition to a planned extradition law but has evolved into a wider movement for democratic reforms.

Some words and phrases in the misleading posts refer to these events; for example “The Purge (Hong Kong, Yuen Long) Announcement” and “Member of the Legislative Council, Junius Ho-Kwan-yiu, will support ‘the white team’”.

Yuen Long is a town in Hong Kong where suspected triad gangsters, wearing white T-shirts, attacked people in a train station on July 21, 2019. Here is an AFP report about that incident.

Junius Ho Kwan-yiu is a member of Hong Kong’s Legislative Council of Hong Kong who is pro-Beijing and has defended the men who attacked people in Yuen Long, as described in this article by local newspaper the South China Morning Post.

A keyword search for the warning text on social networks including YouTube led to this mock trailer about the protests, posted to YouTube on July 22, 2019, titled: “THE PURGE IN Hong Kong (YUEN LONG) Trailer 27/7/2019(SAT)”.

The YouTube video’s Chinese-language description, translated in full below, says that the story shown in the video is “purely fictional”.

An announcement with the same wording as the misleading Facebook posts can be seen 57 seconds into the video:

“On July 21, 2019, a group of white-clad gangsters from the village attacked innocent residents in Yuen Long, including pregnant women and journalists. The Hong Kong police colluded with the gangs, and did not attend and arrest the white-clad mob, instead they pat their shoulders and talked with them in a harmonious atmosphere.

“For Hong Kong people who believe in justice, it's infuriating. July 27, 2019, Saturday, will be designated as the Hong Kong's National Killing Day and Yuen Long will be the experimental area. Hong Kong people have decided to fight against the garbage regime till death.

“On July 27, 2019 Hong Kongers see you in Yuen Long. This story is purely fictional. Any resemblance to actual individuals or events are coincidental.”

There is an American horror film called “The Purge” about a one-day killing spree sanctioned by the US government, which was released in 2013; here is its IMDB page.

This clip from the film, uploaded to YouTube on March 31, 2014, includes an announcement that is worded nearly identically to the message in the Hong Kong trailer and misleading posts.

Only the place names have been changed and the reference to Junius Ho and “the white team” has been inserted into the text.

The announcement appears around 22 seconds into the clip embedded below:

The misleading posts say that Hong Kong’s “Purge” will take place on July 27, 2019; no such event took place on that day.

Comments such as the one below indicated that some people believed the misleading post.

The comment below, when translated to English, says: “The Filipino and Filipina OFWs there are pitiful they will be affected please let’s pray for them”.  OFW stands for Overseas Foreign Worker.