A widely-viewed ad on Facebook urged people to buy ultraviolet light wands to protect themselves during the coronavirus pandemic. But experts say that although UV light can be used against the virus, it can also damage unprotected eyes and skin, while the ad linked to a webpage that falsely claimed endorsement from US health authorities and a doctor.

“The virus is HIGHLY transmissible and easily spread. Masks and the ‘6 feet rule’ are not effective,” said the text of the July 6, 2020 ad, referring to social distancing aimed at curbing the spread of the novel coronavirus.

“Are you doing EVERYTHING you can to protect your family? If you dont have this, then you aren’t,” said the ad, which was later removed. 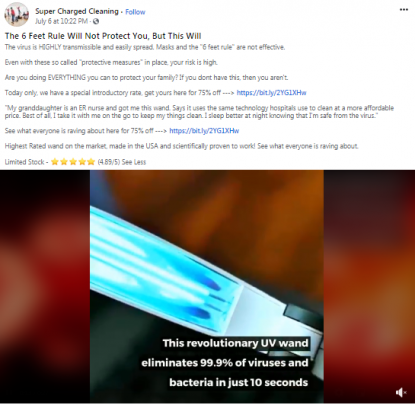 The novel coronavirus -- which has killed more than 584,000 people worldwide since it emerged in China in 2019 -- has provided fertile ground for false information, as well as opportunities for those seeking to profit off widespread fear of COVID-19, the disease it causes.

The ad also included a short video that claimed the product “eliminates 99.9% of viruses and bacteria in just 10 seconds.”

But experts say UV light can pose a risk to users if it is used to disinfect bare skin, as pictured on a webpage linked to in the ad.

A screenshot taken on July 15, 2020 appears to show UV light being used on a child’s hand

“Any UV light source powerful enough to disinfect viruses would come with a substantial risk of causing skin cancer,”  Dr. Benjamin Neuman, an expert in coronaviruses who chairs the Biological Sciences department at Texas A&M University-Texarkana, told AFP by email.

“This is a very bad idea to use near people,” he said.

And while UV could be used to disinfect surfaces, “the risk is that reflected UV light could still cause damage to skin cells, so it is probably not a thing you would want to use without some kind of eye and skin protection,” he said.

The video included in the ad showed a person without any visible protection using one of the wands.

Dr. Julian Leibowitz, an expert in coronaviruses who is a professor of microbial pathogenesis and immunology at Texas A&M’s College of Medicine, made a similar point.

“You can kill coronaviruses with UV but using it on your hands is a bad idea and I doubt that 10 seconds is adequate,” he said by email, referring to the claim in the ad that the product would be effective in less than that amount of time.

The World Health Organization also specifically warns that UV lamps “should NOT be used to disinfect hands or other areas of your skin.”

The ad was linked to a Facebook page run from Italy called Super Charged Cleaning that was created on June 20 but has now been removed. It said that: “The number one best selling UV-C light is finally here. Protect your family from harmful germs in a matter of seconds.”

The ad included links that intermittently directed to either a webpage that provided further details about the UV wands, or one selling “CITRUS SCENTED ALL-PURPOSE CLEANER.”

The webpage that focused on the UV wands contained multiple false claims, including that the US Centers for Disease Control and Prevention (CDC) urges people to use UV light to protect against the coronavirus.

“CDC Urges US Households To Use UV-C Light To Protect Their Families From The Second Wave,” the webpage said.

But the CDC said via email that “the efficacy of alternative disinfection methods, such as ultrasonic waves, high intensity UV radiation, and LED blue light against COVID-19 virus is not known.”

“CDC only recommends use of the surface disinfectants identified on List N against the virus that causes COVID-19,” it said.

The webpage also claimed the UV wands were endorsed by Dr. Wesley Long, medical director of diagnostic microbiology at Houston Methodist, quoting him as saying: “I have personally bought the Super Charged UV-C wand. It has been lab tested independently and is made in the United States.”

This too is false.

“Dr. Long did not say these things nor did he ever use this product and does not endorse it,” Lisa Merkl, a spokeswoman for Houston Methodist, said by email.

And the webpage said that the UV wand was named “best home sterilizing product 2020” by “U.S.A. Consumer Report,” a possible reference to Consumer Reports, an organization that provides independent reviews of products.

But “Consumer Reports has not reviewed or written about UV wands, nor does such an accolade exist,” its director of communications, Barrie Rosen, said by email.