A photo has been shared hundreds of times in multiple posts on Facebook and Twitter alongside a claim it shows a placard with a message congratulating Sri Lankan leaders for "eradicating" the novel coronavirus. The claim is false; the photo has been doctored to include a COVID-19 reference; the original photo of a political placard was taken by AFP in November 2019 following President Gotabaya Rajapaksa’s election victory.

This Facebook post published on May 11, 2020 includes the misleading photo. It has been shared more than 350 times.

The Sinhala-language text at the top left-hand corner of the placard reads: “Our wishes to the president and the prime minister for eradicating corona from Lanka”. A screenshot taken on May 11, 2020, of the misleading post by අලුත් රටක්

The post's Sinhala-language caption translates to English as: “What became of Shavendra Silva, Ajith Rohana and Anil Jasinghe / This is what happened to the war victory too”.

Army commander Shavendra Silva, Deputy Inspector General Ajith Rohana and Director General of Health Services Anil Jasinghe are all members of Sri Lanka’s National Operation Centre for Prevention of the COVID-19 Outbreak (NOCPCO), which was established in March 2020 against the pandemic.

It was also shared on Twitter here and here with a similar claim.

However, the claims are false; the placard in the photo has been doctored to include the message about COVID-19.

A reverse image search on Google found the original photo published in this article published on November 18, 2019 by Arab News, an English-language daily newspaper based in Saudi Arabia. The report's headline reads: “Rajapaksa wins Sri Lanka Presidency by big margin”. 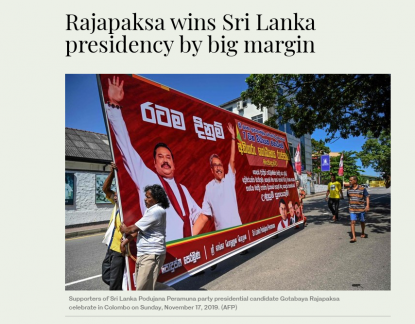 A screenshot of the original photo in the news article

The photograph was credited to AFP. It can be found on AFP’s archive here. 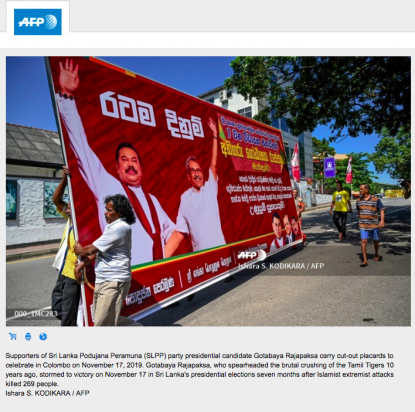 Below is a screenshot comparison of the image in the misleading posts (L) and the AFP photo (R) with edited areas circled in yellow by AFP:

As of May 13, 2020, Sri Lanka has not eradicated COVID-19. According to data published by the Health Promotion Bureau, the number of confirmed COVID-19 cases was 889; including nine deaths; 117 "suspected and hospitalised"; and 366 "recovered and discharged".