A claim that the World Health Organization has ranked the Sri Lanka Army the world’s second best military force for emergency deployments has been shared thousands of times in multiple Facebook posts. The claim is false; the WHO said there was no such ranking; the Sri Lanka Army said it only had registered for an emergency medical reponse team designation with the WHO.

The Sinhala caption below the photo translates to English as: “The World Health Organisation has declared the Sri Lanka Army as the world’s second best military force on emergency deployments.” 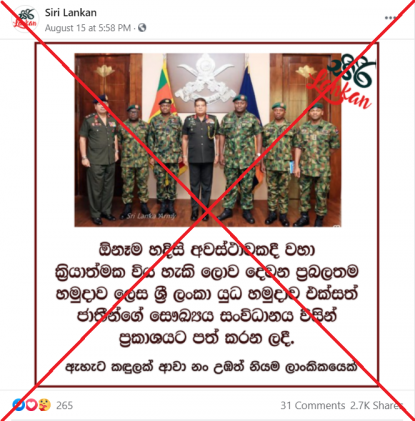 The “WHO has not put out any such ranking,” a WHO spokesperson for Sri Lanka told AFP in an email on September 4, 2020.

The spokesperson added that the claim could be a misinterpretation of another recent achievement by the Sri Lanka Army (SLA).

“I think this post is in reference to the Sri Lanka Army Medical Team’s (SLAMT) registration for a type 1 fixed emergency medical team (EMT). Their registration makes them the second country in the region to apply and the second military in the world to apply. The certification will be done once the mentor completes their visits and SLAMT completes their training drills; COVID-19 travel restrictions have delayed these procedures,” the spokesperson said.

A spokesman for the Sri Lanka Army also refuted the claim, saying that the military has only applied to be registered as a type 1 EMT by the WHO.

A reverse image search of the photo featured in the misleading Facebook post found that it bears no relevance to the WHO and in fact shows a Nigerian military delegation that visited Sri Lanka in October 2019. The photo was released by the Sri Lanka Army here.