A video allegedly showing Canadian Prime Minister Justin Trudeau’s wife in a hospital bed urging people to stay home to avoid ending up seriously ill with the novel coronavirus has been shared thousands of times on Facebook and Twitter. The woman in the video is not Sophie Trudeau, but a British waitress who has been infected with COVID-19.

“If anyone is thinking of taking any chances, just take a look at me,” warns a brown-haired woman speaking to a camera from a hospital bed, her arm linked to an intravenous line.

Throughout the minute-and-a-half-long video, she describes her harrowing experience in the intensive care unit after contracting the novel coronavirus, and explains the toll that the virus has taken on her body.

According to many Facebook and Twitter users who shared the video, the woman in the video is Sophie Grégoire Trudeau, the wife of Canada’s leader. 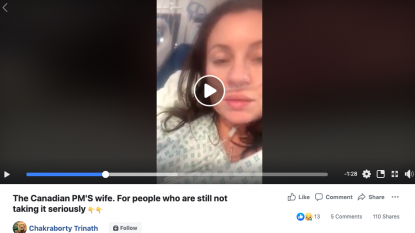 The video was mainly circulated  by accounts based in India, Saudi Arabia, and the Philippines.

But the video does not show Trudeau.

“To anyone who has ever seen Sophie Grégoire Trudeau before, they know the person in that video is not her,” Alex Wellstead, press secretary for the Prime Minister’s Office, told AFP by email.

“As the Prime Minister had said on numerous occasions, Sophie is in self-isolation at home and is getting better,” Wellstead added.

The woman in the video, who does not look like Sophie Trudeau, is Tara Jane Langston, a 39-year-old waitress from the United Kingdom who was taken into intensive care at London’s Hillingdon Hospital after her health deteriorated due to the novel coronavirus, her sister Nicole Poppy Keatley confirmed to AFP via Facebook Messenger.

“You know that’s not his (Trudeau’s) wife. Tara is married to Richard Langston,” Keatley said.

Keatley told The Guardian newspaper that the video was originally shared by Langston to a WhatsApp group of her colleagues, before one of them shared it publicly. Langston’s sister also shared the video on Facebook on March 18, 2020. 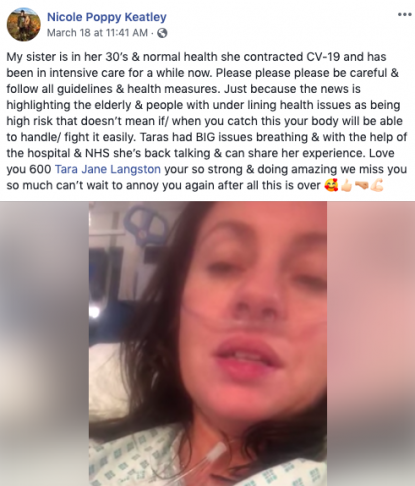 Keatley said that Langston, who is now recovering, was the target of rumors -- including that she is an actress paid by the government to create a panic about the novel coronavirus.

Facing online abuse, Langston published another video in which she confirmed her identity and assured viewers that her illness is real.

Sophie Trudeau was diagnosed with the novel coronavirus, the Prime Minister’s office announced on March 12, 2020, leading her and her husband to remain in isolation since then. 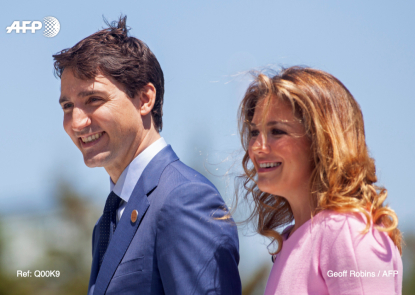 AFP Fact Check has investigated more than 165 false and misleading claims about the novel coronavirus.