Skip to main content
Indian Hindus hold placards as they take part in a rally against 'Love Jihad', in Ahmedabad on July 22, 2018. - 'Love Jihad' is a term used to describe alleged campaigns under which Muslim men target women belonging to non-Muslim communities for conversion to Islam by feigning love. (Photo by SAM PANTHAKY / AFP)

A video showing a man and woman training at a gym has been shared hundreds of times in multiple posts on Facebook and Twitter alongside a claim it shows an example of “love jihad”, a conspiracy that alleges Muslim men in India seduce Hindu women to convert them to Islam. However, this claim is false; this 2017 video actually shows two sports trainers from the Republic of Trinidad and Tobago.

The two-minute 27-second video was published here on Facebook on September 2, 2020. 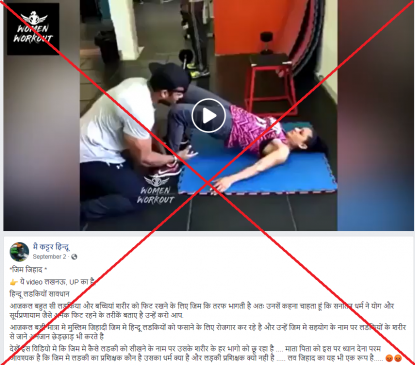 The post’s Hindi-language caption translates to English as: “Gym Jihad / This video is from Lucknow, Uttar Pradesh.

“Beware Hindu girls. Nowadays, a lot of Hindu girls are running towards the gym to keep themselves fit and healthy, although there are a lot of Yoga exercises in the Hindu religion to keep themselves fit. [However] a lot of Muslim trainers are working in gyms in a bid to lure Hindu women and they try and touch our women inappropriately while working out. This video shows a Hindu woman trying to work out in the gym being harassed by a trainer. Parents should pay notice to this.”

“Gym Jihad” is a reference to “love jihad”, a term coined by far-right Hindu groups and refers to a supposed campaign by Muslim men to seduce Hindu women and convert them to Islam.

Lucknow is a city in the north Indian state of Uttar Pradesh.

A combined keyword and reverse image search on Google found a shorter version of the video in the misleading posts published here on the Instagram page ‘Body by Imran’ on June 23, 2017.

The post, tagged to Princes Town on southern Trinidad island in Trinidad and Tobago, reads, in part: “HOW TRAINERS SPOT THEIR CLIENTS IN #2017...#fitcouple...#husband and #wife”.

Below is a screenshot comparison of the video in the misleading post (L) and the Instagram video (R): 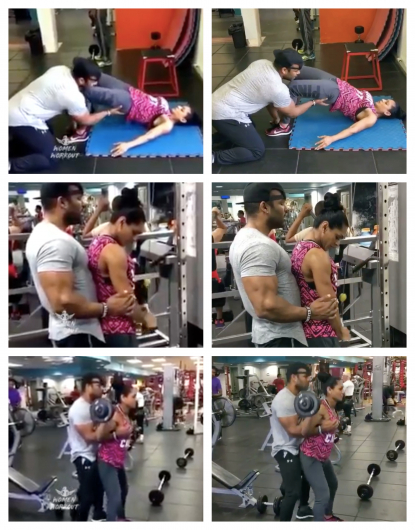 A further keyword search on Facebook of “Body by Imran” reveals the account is managed by Imran Razac, a fitness coach based in the Port of Spain in Trinidad and Tobago. His Facebook page also states he is married.

According to this November 2020 fact check by Indian media organisation Alt News, Razac explained: “The woman in the video is my wife and we are from the same faith.”

Razac also shared the same video seen in the misleading posts here on his Facebook page in June 2017, with the same “#husband and #wife” hashtag.