A video has been viewed thousands of times in multiple posts on Facebook and YouTube alongside a claim it shows giant waves hitting a bridge in Malaysia. The claim is false; the video shows waves hitting a jetty in southern India.

The video was published on Facebook here on December 1, 2020. It has been viewed more than 400 times. 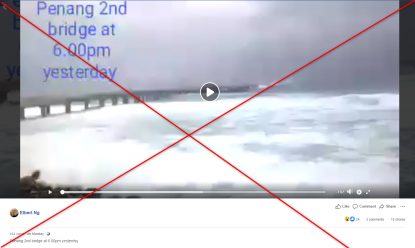 The one-minute video shows big waves hitting an embankment. Text on the screen states: ”Penang 2nd bridge at 6.00pm yesterday”. The claim is also repeated in the Facebook post’s caption.

A combination of a high tide and heavy rains have caused flooding in parts of the Malaysian state of Penang, reported The Star, a Malaysian newspaper, here on November 29, 2020.

The video has also been shared alongside a similar claim here, here and here on Facebook.

The video has garnered more than 5,300 views after it was shared here on YouTube. The title reads: “Penang Bridge Tsunami”.

A reverse image search using keyframes from the video, extracted with digital verification tool InVID-WeVerify, found the same video was posted on YouTube here on August 24, 2017.

The Eastern Jetty is located at Minicoy Island, which is part of the tropical archipelago of Lakshadweep in southwestern India.

A picture tagged at the location of the Eastern Jetty on Minicoy Island on Google Maps corresponds with the video. 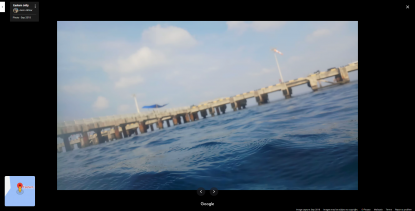 Screenshot of the user generated picture on Google Maps

This December 1, 2020, Twitter thread from the official account of the Penang Second Bridge, also known as the Sultan Abdul Halim Muadzam Shah Bridge, refuted the claim in the misleading posts.

“The Second Bridge Sdn Bhd (JKSB), as the concessionaire of JSAHMS, denies the authenticity of the video and it does not occur in the JSAHMS area.

“The same video started to spread on social media in 2018 and the Penang Island City Council has insisted that the video titled ‘Penang 2nd bridge at 6.00 pm yesterday’ is not at all true.”

This is what the Penang Second Bridge looks like.

AFP has earlier debunked a different false claim, that the video shows a tsunami in the US state of Alaska.