A video has been viewed hundreds of thousands of times in multiple posts on Facebook and YouTube alongside a claim that it shows a “super typhoon” slamming Cagayan province in northern Philippines in November 2019. The claim is false; the video was taken in Roxas, a city in central Philippines, as Typhoon Haiyan made landfall in 2013.

The six-minute 50-second video was published here in a Facebook post on November 19, 2019. It was viewed more than 760,000 times before it was deleted.

The clip, which showed heavy winds toppling trees and ripping roofs off houses, was posted alongside a caption that read: “SUPER TYPOON [sic] IN CAGAYAN TODAY”. 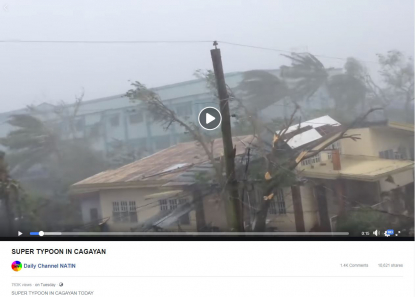 It was shared as thousands of people were fled Cagayan ahead of Typhoon Kalmaegi, which was forecast to swell rivers, cut off roads and threaten low-lying communities across northern Philippines, as reported in this AFP article.

The same video was also in several Facebook posts, for example here and here, and on YouTube here with a similar claim.

The claim is false; the video actually shows Typhoon Haiyan battering Roxas, a city in central Philippines, in 2013.

“Yolanda” is the local name for Typhoon Haiyan, which remains the Philippines’ deadliest typhoon on record. At least 7,360 people were killed or went missing in the storm, according to this AFP report published on November 5, 2018.

Below is a screenshot comparison of the video in the misleading posts (L) and the November 2013 video (R):

A report from the government’s Disaster Risk Reduction Council confirmed that Typhoon Haiyan made landfall in the Philippines in the days prior to the video being published in November 2013.

The deadly storm hit several cities across the central Philippines, including Roxas, as seen in the screenshot below of an AFP graphic that details the typhoon’s path: Below is a screenshot comparison of the one-minute 17-second mark of the video in the misleading posts (L) and the same street in Roxas on Google Street View (R) with corresponding features circled in red: