This video shows a roof collapsing at a mall in Shanghai, China in August 2019

A video has been viewed tens of thousands of times in multiple Facebook posts which claim it shows a shopping mall roof collapsing in Kuala Lumpur. The claim is false; the incident shown in the video actually occurred at a shopping mall in Shanghai, China.

The footage shows people inside a mall standing back as water pours from the ceiling. A few seconds later, part of the ceiling collapses. No one appears to have been hit by the falling debris. 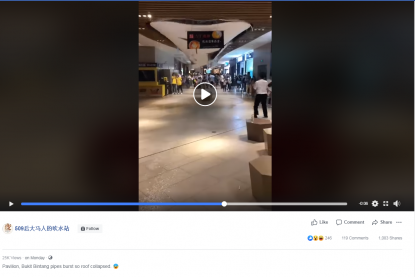 The same clip was shared on Facebook alongside a similar claim here, here and here.

The claim is false; the incident shown in the video actually occurred at a shopping mall in Shanghai, China.

The Weibo post's simplified Chinese caption translates to English as: "The ceiling of a Shanghai mall collapsed, bystanders screamed and fled -- Officials responded: A water pipe burst. On August 24 the ceiling of the basement level of Qibao Vanke Plaza, Minhang District, Shanghai suddenly collapsed and passers-by screamed and fled. Shop workers nearby said that several small holes had appeared in the ceiling and water was flowing through them. The ceiling collapsed about a minute later. Qibao Town's publicity department said that the ceiling water pipe burst first, then the water overflowed and caused the ceiling collapse. No-one was injured."

Sina Shanghai, Sina’s regional Weibo account, also posted this video on August 27, 2019. A Shanghai Television logo can be seen in the top left corner of the screen.

The Weibo post's caption translates to English in part as: "(The collapsed ceiling at Qibao Vanke Plaza, Minhang District, Shanghai has been recovered Local malls under comprehensive check on potential dangers)". 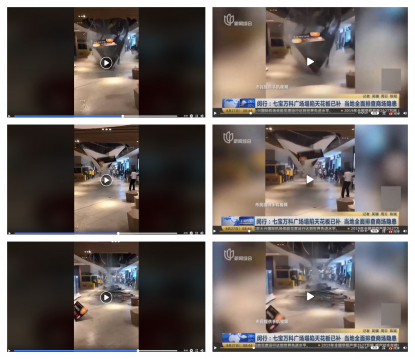 The video of Qibao Vanke Plaza corresponds with photos of shops in the mall posted by users on Dianping.com here, here and here. Dianping.com is the Chinese equivalent of information site Yelp.

Below are three sets of comparison of the shop signs from the video in the misleading posts (L) and the corresponding shop photos posted on Dianping.com by users (R):

Comparison of the shop signs from the misleading video (L) and the corresponded shop pictures posted on Dianping.com by users 鹿鹿要去看樱花, 程小雨 and 美好事物 (R)

The first paragraph of the traditional Chinese language report translates to English as: "The water pipe in a mall from Qibao Town, Minhang District, Shanghai burst suddenly on Saturday (August 24). Water leaked from the ceiling and passers-by evaded it. The ceiling collapsed -- it’s thought because it was not strong enough to bear the added weight of the water from the suspected leak. Fortunately, no-one was injured. After two hours of cleaning up, the affected part of the mall was back to business. The cause of the incident is still under investigation."