A video has been viewed more than 1,000 times in multiple Facebook and Twitter posts alongside a claim it shows police in the Indian state of Jammu and Kashmir recovering ammunition from a motorbike. The video is being shared in a misleading context; it shows police officers in Pakistan recovering ammunition and a firearm hidden inside a motorbike.

The video was published here on Facebook on September 24, 2019, where it has been viewed more than 1,100 times.

In the four-minute, 19-second video, at least three police officers can be seen retrieving ammunition from inside the seat of a motorbike.

The post’s Hindi-language caption translates to English as: “People say that police deliberately stop the vehicles, now what will they say on this, Jammu and Kashmir police.” The video is being shared in a misleading context; it shows police officers in Pakistan recovering ammunition and a firearm hidden inside a motorbike.

A reverse image search on Google using keyframes of the video obtained using video verification tool InVID and a subsequent keyword search found this identical video published on Facebook on September 17, 2019. The video is embedded below.

The video was published on the Facebook page of district police of Kohat district in Khyber Pakhtunkhwa, Pakistan.

The police station is listed below here on the website of the bureau statistics of Pakistan.

The post’s Urdu-language caption translates to English as: “A successful operation was completed by a Kohat inspector at a checkpoint, an arms smuggler has been detained. The weapons seized include one repeater gun, one rifle, four pistols, six chargers and 1,600 cartridges that were being smuggled. The accused has been arrested and a case has been registered against him in Shakardara village: inspector Yusuf Hayat.”

Shakardara is a village in Kohat district in Pakistan. The uniform worn by police officers khaki trousers and black shirt is the same worn by Kohat Police officer captured in this AFP photograph. 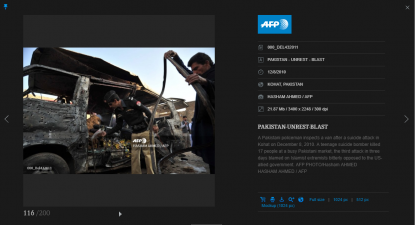 Screenshot of the AFP photo

The uniform also matches the uniform worn by Kohat police officers seen in this photo published on their official Facebook page. 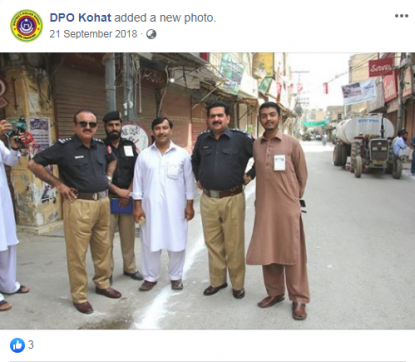 Meanwhile, the uniform worn by Kashmir police is khaki-colored shirts, not black shirts.

Below is a screenshot of this AFP photo shows a Kashmir police personnel: 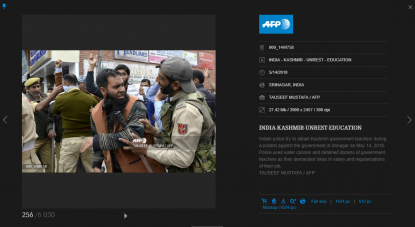 The incident about Shakardara police foiling a gun-smuggling attempt was reported in local Urdu-language media reports on September 17, 2019, for example here and here.