This video shows a Pakistan International Airlines plane in April 2020

A video of a row between passengers and cabin crew on board a plane has been viewed tens of thousands of times in multiple Facebook and Twitter posts which claim it was filmed on an Air India flight. The posts claim the the video shows the airline failed to enforce social distancing measures during the coronavirus pandemic. The claim is false; Pakistan International Airlines said the video was taken aboard one of its flights in April 2020; the video has previously circulated in reports about a Pakistan International Airlines flight. 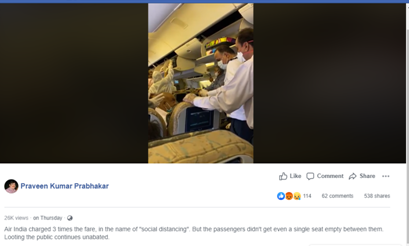 A screenshot taken on May 12, 2020, of the misleading post by Praveen Kumar Prabhakar

Between the 20-mark and 30-second mark, a male voice can be heard speaking in Urdu: “You’ve charged us the price of three seats for one, and we’ve paid 3,000 dollars. But it seems like you are fooling us. There is no social distancing here.”

The caption of the Facebook post states: “Air India charged 3 times the fare, in the name of ‘social distancing’. But the passengers didn't get even a single seat empty between them. Looting the public continues unabated.”

Air India is the flag carrier airline of India and is owned by Air India Limited, a government-owned enterprise.

The video in fact shows a Karachi to Toronto flight run by Pakistan International Airlines (PIA), the flag carrier of Pakistan.

A visual analysis of the footage using Watch Frame by Frame, a video verification tool, found the word “Pakistan” visible on one of the in-flight screens between the one-minute 15-second and one-minute 30-second mark of the video in the misleading post.

Below are two screenshots of the video in the misleading post with the relevant in-flight screen circled in red: 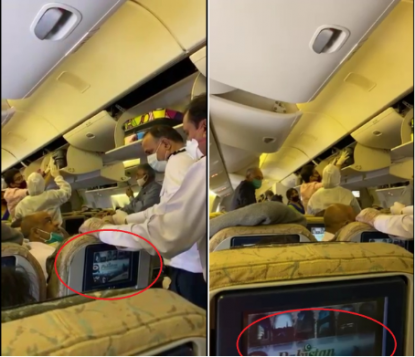 The word “Pakistan” in the same font style and colour is also seen in photographs taken aboard PIA flights by various travel websites here and here.

A PIA spokesperson, Abdullah Hafeez, told AFP the video was taken aboard one of its Karachi-Toronto flights in April 2020 and shows an altercation that occurred after a passenger refused to “share seats with anyone as it does not allow social distancing”.

"It was explained to him that it is not an international aviation rule to ensure middle seats remain vacant," Hafeez told AFP via WhatsApp on May 12. "He was assured that all amenities and touch points in the aircraft have been thoroughly sanitised and all the passengers are required to wear masks throughout the duration of the flight. The passenger was convinced and flew with us on the same flight."

The video in the misleading post was also included in this April 26 news segment from Pakistani broadcaster GNN alongside the title “No Social Distancing Rules in PIA's flights to bring back stranded Pakistanis Home”.

#PIBFactCheck
Claim: Video on social media showing passengers on purported @airindiain overseas flight arguing over being charged thrice the normal fare & then packed in, without #SocialDistancing

Fact: #Fake video. @MoCA_GoI says it is from a neighbouring country's airlines pic.twitter.com/Uww1zrHH5m