This video shows Japan during a tsunami in 2011, not Typhoon Hagibis in 2019

A video showing floodwaters surging down a street has been shared in multiple Facebook posts that claim it shows a storm in Japan in October 2019, when Typhoon Hagibis lashed the country. The claim is false; the video shows a tsunami that hit Japan in 2011.

The video was published here on Facebook on October 14, 2019.

The post’s Malaysian-language caption translates to English as: “The condition in Japan now.. Hope they are tough in facing this test..”

The same video was shared in Facebook posts here, here, here and here with a similar claim.

The video was published the same week as Typhoon Hagibis hit Japan, claiming more than 70 lives as reported here by AFP.

Other posts from Facebook pages based in the Philippines, such as here and here, explicitly claim the footage shows Japan during Typhoon Hagibis in October 2019.

The claim is false; the video shows a tsunami that hit Japan in 2011.

A reverse image search on Google using a keyframe extracted from the video found it published here on YouTube on December 18, 2011. The video has been viewed more than four million times.

Japan was rocked by a 9.0-magnitude undersea earthquake in March 2011, which sparked a tsunami that killed about 18,500 people, as reported here by AFP.

Below is a side-by-side comparison of the video in the misleading post (L) and the YouTube video (R): 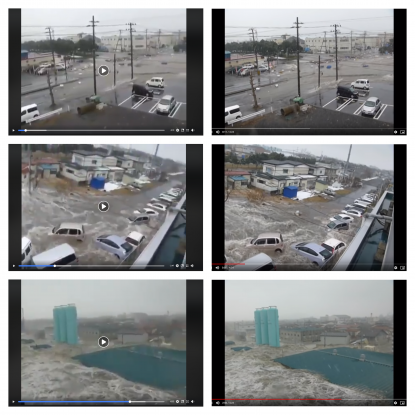 The video was filmed here in the Japanese city of Ishinomaki.

The light blue dome visible in the still from the video (L) can be seen in the Google Street View imagery of the location taken in August 2011 (R):

The same video was submitted to Japanese commercial television network Fuji News Network and published in this report.

The report states the video was submitted by Koichi Abe, one of the 35 people who evacuated to the rooftop of Ishinomaki Gas in Ishinomaki city on March 11, 2011.

AFP has previously debunked similar false claims that state the video shows a tsunami in Indonesia.

In this video report published on March 9, 2013, AFP investigated the devastation in the town of Ishinomaki after the disaster claimed 4,000 lives there.