A video has been viewed hundreds of thousands of times in multiple posts on Facebook and Weibo which claim it shows a Hong Kong secondary school forcing its students to go on strike during ongoing pro-democracy protests in Hong Kong. The claim is false; the video shows a preacher giving a sermon at a Hong Kong church in which he did not mention any student strike; the secondary school cited in the misleading posts confirmed the man in the video is not a member of its staff, and it did not force any of its students to strike.

The video was published here on Facebook on November 20, 2019.

The post’s traditional Chinese-language caption translates to English as: “See how the Church of Christ in China Kei To Secondary School harms and confuses its students, forcing them to strike #MouthFullofTwistedLogic
#HarmStudents". 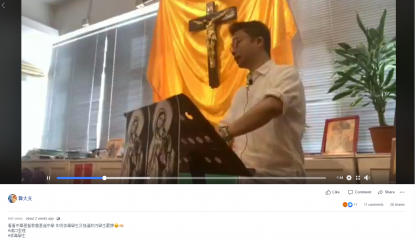 The post refers to the Church of Christ in China Kei To Secondary School in Hong Kong.

Pro-democracy demonstrations have been staged in Hong Kong, a semi-autonomous region in China, for six continuous months. Students have frequently joined the protests, sometimes boycotting classes as part of citywide strikes. Here is an AFP report about the developments.

It has also been viewed more than 210,000 times in posts on Weibo here, here and here alongside a similar claim.

The claim is false; the video shows a preacher giving a sermon at a Hong Kong church in which he did not urge students to go on strike.

A keyword search on Google found the video in the misleading posts taken from this YouTube video, which was uploaded to the official channel for the Ekklesia Hong Kong church on November 17, 2019.

The video has been embedded below:

The description of the video states the sermon was delivered by preacher Frankie Ng on November 17.

A corresponding LinkedIn profile for Frankie Ng can be seen here.

Footage in the misleading posts corresponds with the longer YouTube video from the three minute 35 second mark to the five minute 41 second mark.

Below is a screenshot comparison of the video in the misleading posts (L) and the longer YouTube video on the church’s channel (R):

Ng’s speech in the video in the misleading posts can be translated from Cantonese to English as: "That wasn't the first time traffic police fired live rounds. They already did that once during the Fishball Revolution. But at the time they were not shooting people at close range. That was so wrong. And of course police have again denied any accusation.

“That's not new or surprising to us. But civilians who haven't even had time to catch their breath after police fired live rounds at protesters were again shook to the core by what's happening at the universities.

"The Chinese University of Hong Kong (CUHK), my alma mater, resembled a war zone in the past week. Police stormed the campus like soldiers invading a city.

“In contrast, the Japanese allegedly never entered any Hong Kong schools during their World War II invasion out of respect for the city's universities. No regime in the world would destroy its own universities. How ridiculous is that?

"It wasn't only happening at CUHK, but also the Hong Kong Polytechnic University (PolyU), City University of Hong Kong (CityU) etc. Why did they do that? Some say police didn't understand why, or disliked being frequently called "Yi Jin guys" (a negative term mocking Hong Kong police officers who were only qualified for the Diploma Yi Jin and failed to receive any university offers) by the university students, so they decided to "enter" universities in their own way, and certainly not by taking exams.

“During the standoffs, two CUHK presidents went to the campus. To me, that presented a challege and a huge contrast between police and us. We have a high regard for university presidents and consider them important figures. But shortly after the presidents had conversations with police, they were pepper sprayed, or rather, tear gassed. That shows the values we uphold and things we cherish and consider important do not mean the same to others.

"Why are those things not important to them? Is it simply because they are undereducated?"

The front page of the Ekklesia Hong Kong website here shows a similar background image to the video in the misleading posts.

Below is a screenshot comparison of the video in the misleading posts (L) and Ekklesia Hong Kong’s website (R):

Ng, the minister-in-charge of the church of Ekklesia Hong Kong, told AFP via Facebook Messenger on November 29, 2019, that he was the person talking in the video.

He said the video was filmed at his church in the district of Sham Shui Po, Hong Kong, and that there were no students in the congregation.

“This is the sermon delivery in a regular weekly worship gathering in my church,” he said. “They are adults from various age groups and professions. There were no students there.

“The speech aimed to promote the love and justice of Christ against the social as well as psychological context of the audience.”

The Church of Christ in China Kei To Secondary School published this statement on November 20, 2019, refuting the claim in the misleading posts that it ordered its students to strike.

The statement in traditional Chinese translates to English in part as: “Some of our students refused to return to class this morning, and the school has taken immediate action in urging them to attend classes as usual. However, taking into consideration students' feelings and their learning progress, we have organised for those students to self-study at the school hall.

"We have contacted their parents according to the school's mechanism. Meanwhile, the students have received counselling from social workers, guidance counselors and class teachers, who tried to persuade them in returning to class. The school made sure teachers were carrying out their duties. Most students were attending classes as usual.

“In addition, the school would like to clarify that the person in the video mentioned above is not a teacher or staff member of our school, and the backdrop does not show any part of our campus. We did not force students to enter the school hall and stage a strike there."

Below is a screenshot of the school’s statement: 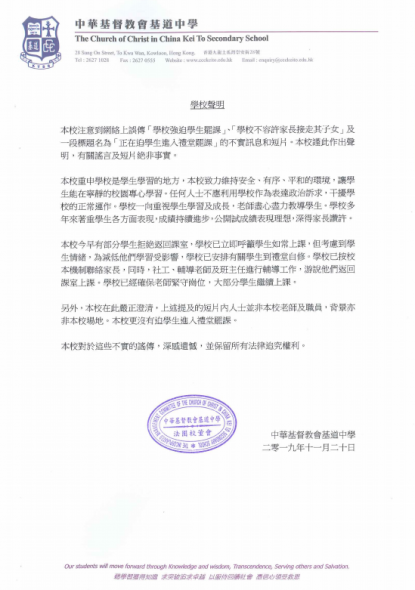 Screenshot of the school’s statement