The video shows a hailstorm in Romania in 2019

A video has been viewed thousands of times in multiple Facebook, Twitter and YouTube posts which state it shows hail stones falling from the sky in Rome, Italy on February 19, 2020. The claim is false; the video shows a hailstorm in Romania in 2019.

The 15-second clip, which shows large hail raining down onto parked cars, was published here on Facebook on February 22, 2020. It has been viewed more than 100 times.

The post’s traditional Chinese-language caption translates to English as: “(Shocked emoji) It's raining stone, do you think people will have retribution if they do evil things?

“(Pray emoji) On Wednesday in Rome, Italy (2020/2/19), there was a stone rain that had never been seen or heard before. This time, the stone rain in Italy shows us the unpredictable, uncontrollable and unpreventable natural disasters, and the horror of extreme weather again! There are many disasters in the world this year. It's terrible.” 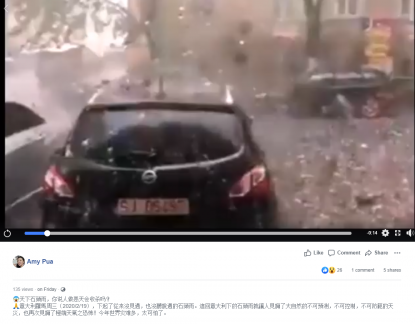 The claim is false; the video has circulated online since at least May 2019 about a hailstorm in the town of Zalau in Salaj county, Romania.

A reverse Google image search with video keyframes found this report published on May 28, 2019 by Stirile ProTv, a Romanian television news programme.

“Several people were injured after quail egg-sized hail hit Zalau and damaged cars, making windshields fall down on drivers and passengers. Building facades and windows were destroyed," the article reads.

The video embedded in the article shows the same footage as the misleading post and is credited to Răzvan Botăreanu on the top right-hand side.

Below are screenshot comparisons of the misleading footage (L) and the Stirile ProTv footage (R): 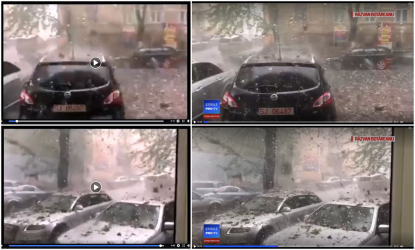 The same video also appeared in Facebook posts here and here on May 28, 2019 with captions stating it shows a hailstorm in Zalau captured by Răzvan Botăreanu.