A video has been viewed more than a million times in Facebook, Twitter and YouTube posts that claim the footage shows the funeral of a 27-year-old veterinary doctor who was gang raped and killed on November 27, 2019 in Hyderabad, a major city in southern India. The claim is false; the video actually shows the funeral of an Indian army soldier in a village in west India which was held on November 26, a day before the attack in Hyderabad.

The attack on the veterinarian in Hyderabad is the latest rape-murder case to attract nationwide attention and prompt widespread anger across India. AFP reported on the killing here.

The 30-second video purporting to show the victim's funeral was published here on December 2, 2019, on Facebook.

The English-language caption names the rape victim. In accordance with an Indian Supreme Court ruling barring the naming of rape victims, AFP has redacted the woman's name. 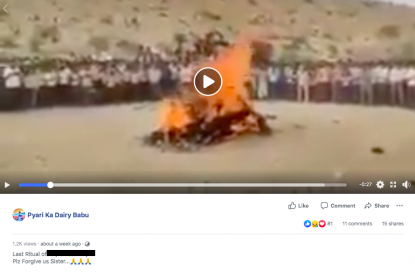 The claim is false; the footage actually shows the funeral of an India soldier that was held one day before the attack in Hyderabad in a different part of India.

A Google reverse image search using video keyframes extracted with InVID, a digital verification tool, found a similar video published on YouTube here on November 26, a day before the killing in Hyderabad.

The Hindi-language title of the video translates into English as: ‘Funeral of martyr Peera Ram. A Google search with the keywords “martyr Peera Ram” led to multiple news reports on the soldier, who died in an accident while serving in Kashmir on November 24, for example here and here.

General Bipin Rawat #COAS and all ranks salute the supreme sacrifice of Naik Peera Ram and offer deepest condolences to the family. https://t.co/bpryHSe6o6

The ceremony was held in his native village of Barmer in Rajasthan, a state in west India that is approximately 1,600 kilometers north of Hyderabad.

Below is a screenshot of the burning pyre from the media report: 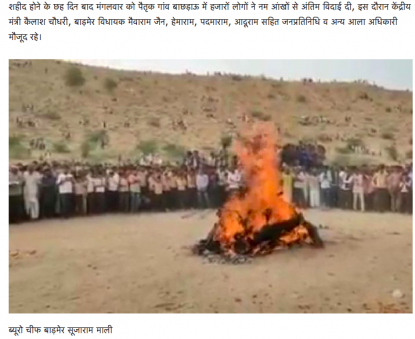 The funeral for the 27-year-old Hyderabad victim took place on November 28, according to ETV news. The television network published a video from the funeral on YouTube here.

Disha is a pseudonym given to the victim by Indian media. for example, The Hindu, a major Indian newspaper, also reported on Disha here.