A video has been viewed more than 10,000 times on Facebook and Twitter alongside a claim that it shows Muslims resisting French police’s efforts to close down the mosque under the French president’s order in 2020. The claim is misleading; this video actually shows French police removing Muslims from a mosque in Paris in 2017.

The two-minute, 20-second video shows men lying on the ground and police officers trying to drag them away.

The Malaysian-language caption, translated to English, reads: “French police straightaway closes all mosques on the orders of Prime Minister Macron. Meanwhile, Muslims protested and rejected the closure of the mosque. Let us pray that Allah will repay the deeds of these non-believers against the Muslims.” 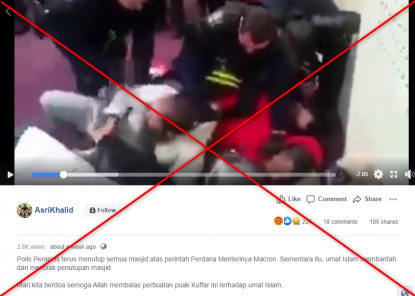 The post was shared shortly after French authorities decided on October 20, 2020, to shut down a mosque at the Paris suburb of Pantin for six months after it allegedly published a video on its Facebook page that criticised teacher Samy Paty’s showing of a cartoon of Prophet Muhammad to his class, days before his murder.

The video has been viewed some 7,000 times after it appeared with a similar claim here and here on Facebook, and here on Twitter.

The video was also shared with a similar claim in English here, and in Indonesian here and here.

A combined keyword and reverse image search using keyframes extracted with InVid-WeVerify found this video, which shows similar scenes as those in the misleading post, posted on the YouTube channel of French online media Rif Online on March 23, 2017.

The video is titled in French: “Poignant! Forced evacuation of the mosque in downtown Clichy-la-Garenne.”

Clichy-la-Garenne is a northern suburb of Paris.

On March 22, 2017, French police removed Muslim worshippers from a prayer hall that had operated in a government building in Clichy after the local government wanted to turn it into a library, AFP reported here. The Muslim worshippers refused to go to a designated new mosque because they said it was too small and had poor transport links.

The incident was also reported by French media 20 Minutes here.

Below is a screenshot comparison of the video in the misleading post (L) and the YouTube video (R), with similarities circled in red by AFP: 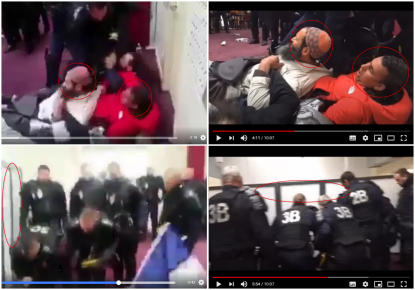