A video has been viewed thousands of times in multiple Facebook, Twitter and YouTube posts published in 2020 with a claim that it shows the "Chinese prime minister" praying inside a mosque after the outbreak of a new strain of novel coronavirus in China. The claim is false; the video actually shows Abdullah Ahmad Badawi, the Malaysian Prime Minister at that time, attending a Friday prayer at a Beijing mosque when he visited China in 2004. The logo for US news agency the Associated Press can be seen in the top-right corner of the video.

The post’s caption reads: “China PM who told we'll translate the Quran as our own realised that the only one way to protect from the korona virus is doing 'sajtha' to Allah and went to mosque to pray, Masha llah.”

“Quran”, or Koran, is the holy book of Islam.

“Mashallah” is an Arabic word which means “God willing”, which is used for praising or expressing appreciation.

“Korona virus” refers to the novel coronavirus, believed to have originated from a wildlife market in the central Chinese city of Wuhan. The viral epidemic has killed at least 490 people and infected 24,000 others in China since its emergence in December 2019, as reported here by AFP on February 5, 2020.

The video was also shared here on the official Facebook page belonging to an Indian politician from a regional political party All India Majlis-e-Ittehadul Muslimeen.

The claim is false; a reverse image search using keyframes from the video found that it actually shows a former Malaysian prime minister, Abdullah Ahmad Badawi, praying in a mosque in Beijing when he visited China in May 2004.

The original clip was published here on May 28, 2004, on the official archive website of US news agency the Associated Press.

The same 45-second video was also published here on the official YouTube channel of Associated Press archives on July 21, 2015, with an identical title and description.

Nanxiaopo Mosque is a mosque located in Beijing’s Chaoyang district.

Below are screenshot comparisons of the misleading video (L) and the Associated Press footage from YouTube (R): 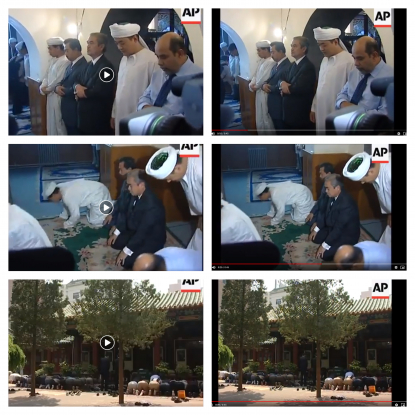 AFP published a photograph here of the former Malaysian prime minister praying in Nanxiapo Mosque in Beijing on May 28, 2004. 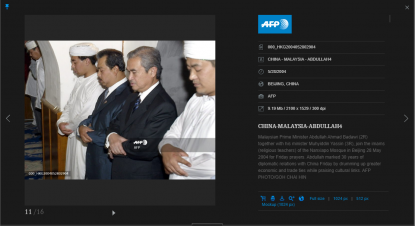