A lengthy text post has been shared repeatedly on Facebook, Twitter, and WhatsApp alongside a claim that it is an official message issued by India's Ministry of Health after the oubreak of a new strain of novel coronavirus in India. The claim is false; the Indian government’s Press Information Bureau said it did not issue the purported emergency warning message.

The text post was published here on Facebook on January 28, 2020, alongside a photo of medical personnel wearing face masks.

It has been shared almost one thousand times. 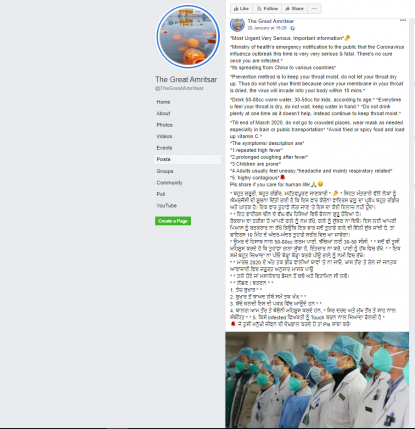 The text reads, in part: “Most Urgent,Very Serious, Important information. Ministry of health’s emergency notification to the public that the Coronavirus influenza outbreak this time is very very serious & fatal. There's no cure once you are infected.Its spreading from China to various countries*

“Prevention method is to keep your throat moist, do not let your throat dry up. Thus do not hold your thirst because once your membrane in your throat is dried, the virus will invade into your body within 10 mins.*

“Drink 50-80cc warm water, 30-50cc for kids, according to age.Everytime u feel your throat is dry, do not wait, keep water in hand.Do not drink plenty at one time as it doesn’t help, instead continue to keep throat moist.*

“Till end of March 2020, do not go to crowded places, wear mask as needed especially in train or public transportation.Avoid fried or spicy food and load up vitamin C.”

It is followed by a translation of the above in the Punjabi language.

Copies of the purported text message were also shared here, here, here on Facebook, and here and here on Twitter.

The claim is false; the Indian government’s Press Information Bureau said it did not issue the purported emergency warning message.

On January 20, 2020, the Press Information Bureau posted this tweet describing the message as a “fake emergency notification”.

No such notification has been issued !!!

For prevention against #Coronavirus and travel advisory, pls see:https://t.co/ybsKk8c5tChttps://t.co/qnK1JCVhmI

It reads, in part: “Fake emergency notification from @MoHFW_INDIA is doing rounds on social media.

“No such notification has been issued !!!”

India’s Ministry of Health and Family Welfare has issued several guidelines on travel and reducing the risk of transmission of the novel coronavirus here on its website, but none match the wording of the purported text message warning.