This video shows a fire at a residential building in Chongqing, a different Chinese city

A video of a building engulfed in flames has been viewed thousands of times in multiple posts on Facebook, Twitter and YouTube alongside a claim that it shows an explosion caused by the use of alcohol disinfectant in Wuhan, the Chinese city at the epicentre of the new coronavirus outbreak. The claim is false; fire officials in Wuhan and Chongqing, a city in Sichuan province, clarified the video in fact shows a fire ignited by a cigarette at a residential block in Chongqing; Baidu Maps' street view imagery of the address provided by authorities shows the same building seen in the video.

The video was published on Facebook here on February 7, 2020. It has been viewed more than 200 times.

The post’s simplified Chinese-language caption translates to English as: "An explosion at Jiaxingyuan on Gutian 4th Road, Wuhan, was caused by the use of air conditioner at an apartment thoroughly disinfected by alcohol. Be warned, be warned". 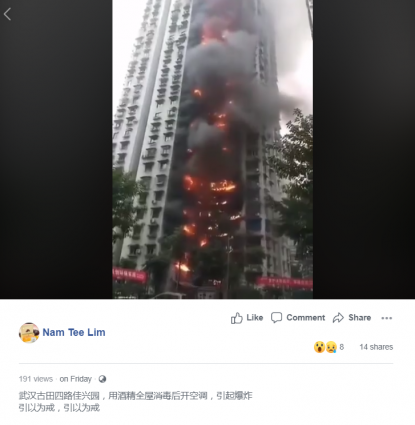 The novel coronavirus, which emerged in the city of Wuhan in Hubei province in late 2019, has killed more than 1,000 people and infected more than 42,000 others in China, AFP reported here on February 12, 2020.

The claim is false; Wuhan and Chongqing fire officals clarified the fire in fact took place in Chongqing in Sichuan province, and had no connection to the novel coronavirus.

Wuhan Fire Service refuted the claim in a February 7, 2020, post on its verified Weibo account, which translates to English as: "A resident at Jiaxingyuan, Gutian 4rd Road, Wuhan, used alcohol disinfectant, which led to a fire and an explosion? Rumour debunked: The truth is the blaze took place at a building at Jiazhou Garden residential area in Chongqing around 5 pm January 1, 2020".

The post also contains a screenshot from the misleading video with “rumour” in red Chinese characters superimposed on it. 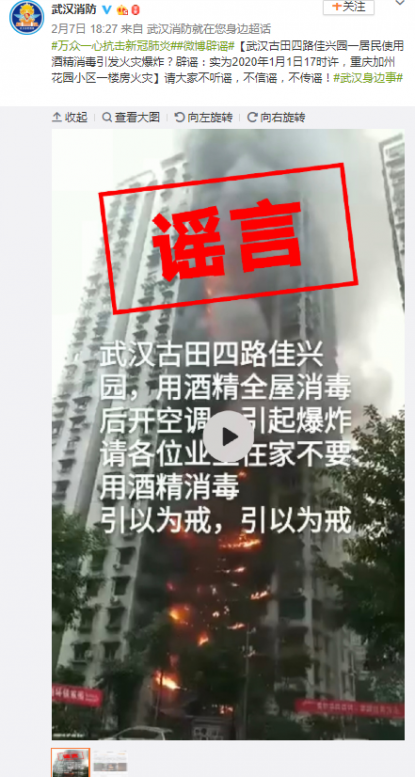 On January 1, 2020, Chongqing Fire Service reported a fire at the same address here. In a separate Weibo post on January 20, 2020, the department said the blaze was ignited by a cigarette.

Translated to English, the January 20 post states: "At about 16:42 January 1, 2020, a fire erupted at building A4 in Jiazhou Garden residential area, Yubei district, Chongqing city, but caused no casualties.

“Our investigations show the blaze started after Yang, a tenant living in unit 2-5 at building A4, accidentally set fire to a quilt while smoking. Yang subsequently placed the quilt on the balcony without completely extinguishing the fire, leaving the quilt ablaze again. Flammable objects nearby were then set alight during the full-blown fire."

The building on Baidu Maps at the address provided by fire officials corresponds with the tower block seen in the video in the misleading posts.

Below is a screenshot of the corresponding Baidu Maps street view imagery:

Screenshot of the street image on Baidu Maps