A video has been viewed tens of thousands of times on Facebook, Twitter and YouTube alongside a claim it shows Italian nationals expressing their gratitude to China for providing aid during the novel coronavirus pandemic. The claim is false; the video shows a Belarusian band singing a Chinese song several months before COVID-19 was first detected in the Chinese city of Wuhan. 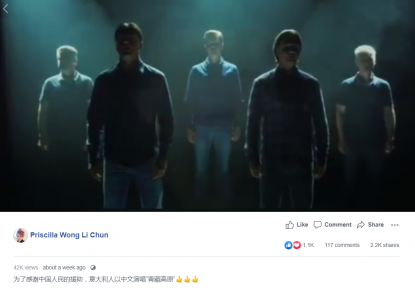 The post’s simplified Chinese caption translates into English as: “To express thanks to Chinese people for their help, Italians sang ‘Qinghai-Tibet Plateau’ in Chinese language”.

As of April 6, the novel coronavirus has killed at least 15,887 people in Italy.

The claim is false. A keyword search on Google found an identical video posted on the YouTube channel of a Belarusian band, Clear Voice, on August 26, 2019.