A video of a woman reciting Sanskrit verses has been viewed thousands of times on Facebook and Twitter alongside a claim that she was delivering sacred verses on a Spanish radio station during the novel coronavirus pandemic. The claim is false; the video was recorded by a London-based Sanskrit teacher who published the footage on her official social media accounts in November 2019, weeks before the novel coronavirus outbreak. 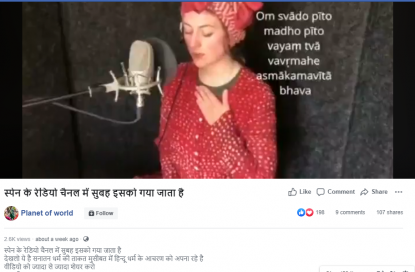 The post’s Hindi-language caption translates to English as: “Radio in Spain is broadcasting this in the morning. See the power of Sanatan Dharma. They are rituals of opting Hindu religion in the time of crisis. Please share this video more and more. Hail to Lord Rama.”

The verses heard in the video are spoken in Sanskrit, an ancient Indo-Aryan language mostly spoken on the Indian subcontinent. They translate to English as: “O giver of food, may you provide us with health and energy. The foolish man wins food with fruitless labour. That fruit, I speak the truth, shall be his ruin. Who feeds no friend, no man to love him. All guilt is he who eats alone (so eat together, give or share). Om, peace, peace and peace.”

On April 4, 2020, Spainish Prime Minister Pedro Sanchez announced an extension of the country's lockdown to combat the coronavirus, as reported here by AFP.

A reverse Google image search using video keyframes extracted with InVID-WeVerify, a video verification tool, found a longer version of the video. It was published here on November 19, 2019 on a YouTube channel owned by a London-based Sanskrit singer and tutor, Gabriella Burnel.

The clip seen in the misleading Facebook posts starts at the one minute 16-second mark of the YouTube video.

“These recordings were made in a studio in London. Their purpose is to share sounds with the world that are pure in their vibration so hearing them may be of benefit to the listener, give peace of mind and open the heart,” Burnel told AFP by email on March 31, 2020.

In the About section of Burnel’s YouTube channel, which is called Gaiea Sanskrit, the singer linked to several other social media and music streaming platforms, including Facebook, Soundcloud and Apple Music, that are under the same name. Burnel also has a website under the same name.

Burnel is listed as a London-based private Sanskrit tutor by Oxford University.