A video that shows several vehicles being crushed by a slab of concrete has been viewed thousands of times in online posts alongside a claim it was filmed in India after a cyclone struck in 2021. The claim is false: the video has circulated online since at least July 2020 in unrelated reports about torrential rain lashing Saudi Arabia.

The video was shared here on Facebook on May 17, 2021. It has been viewed more than one thousand times.

Trident is a luxury hotel in Mumbai in western India.

The misleading post circulated online as a deadly cyclone hit western India on May 17, 2021.

Six people died and nine were injured as the storm lashed Maharashtra state, of which Mumbai is the capital, AFP reported.

The claim is false: the video has circulated online since at least July 2020.

A reverse image search of the video’s keyframes extracted using InVID-WeVerify, a digital verification tool, combined with keyword searches, found it closely matches this footage posted on YouTube on July 31, 2020.

The video’s Arabic-language caption translates as: “Watch the moment of a man's survival after a wall fell on a number of cars in Medina due to strong winds and rain.”

Medina is a city in western Saudi Arabia.

Below is a screenshot comparison of the video in the misleading posts (L) and YouTube video posted in July 2020 (R): 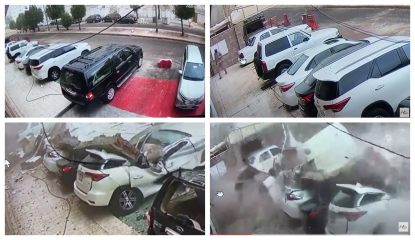 It reported that the cars were damaged by torrential rains in Medina.

Reports by Saudi media organisations Al-marsd and Sabq about the torrential rain in Medina also contained the same footage.

This Google Street View imagery of the Trident hotel in Mumbai bears no resemblance to the video in the misleading posts.

A video posted by the state-run Air News Mumbai here on Twitter on May 17, 2021 shows no vehicles were destroyed in the vicinity of the Trident hotel in the immediate aftermath of the cyclone.