A video of cattle being washed away by flood waters has been viewed thousands of times on Twitter, Facebook and YouTube alongside a claim the incident occurred in China in August 2020. The claim is false; the video has previously circulated in a July 2020 report about severe flooding in Mexico during Hurricane Hanna. 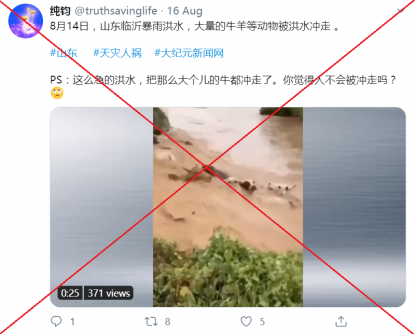 Part of the simplified Chinese-language tweet translates to English as: “On August 14, Shandong's Linyi city saw rain storms and floods, a great number of cattle were washed away by the flood.”

Linyi and other cities in China’s Shandong province experienced heavy rainfall and flooding in mid-August 2020. AFP reported on the flooding here.

A reverse image search on Google of keyframes extracted from the video found the clip published on YouTube here by Mexican TV network Imagen Televisión on July 28, 2020.

The Spanish-language headline of the Imagen Televisión video translates to English as: “Zacualpan river overflows in Nayarit drags cattle”.

The video is captioned: “These are the images of the overflow of the Zacualpan River in Nayarit that dragged the cattle from the area after the passage of ‘Hanna’.”

Below is a screenshot comparison of the video in the misleading tweet (L) and the Imagen Televisión video (R):

Cattle being swept away in flooding caused by the storm was also reported here by Mexican newspaper La Jornada.