A video has been viewed tens of thousands of times in multiple posts on Facebook and Twitter which claim it shows Gina Haspel, the current director of the US Central Intelligence Agency (CIA), being arrested. The claim is false: the footage is actually from 2016 and shows former US Secretary of State Hillary Clinton appearing to faint after leaving a 9/11 memorial ceremony.

The video was published here on Twitter on December 1, 2020.

The 15-second video’s traditional Chinese-language caption translates to English as: “The head of the CIA Gina was arrested, and she has agreed to confess to the fraud. The White House will announce relevant information soon, and everyone is waiting for good news. President Trump and the American people are certain to win!” 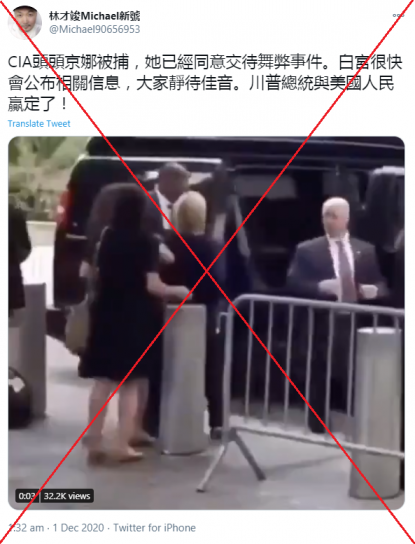 Gina Haspel has been the Director of the Central Intelligence Agency (CIA) since May 18, 2018.

Comments from some Twitter users in response to the misleading post indicated they believed the clip shows Haspel.

Some of the comments translate to English as: “The next ones (to be arrested) would be Hillary and Obama”; “Should definitely arrest these bastards, liberate the US”; “Good news, glad to hear that”.

A reverse image search on Google using key frames taken from the video led to this YouTube video published by UK newspaper The Telegraph on September 11, 2016.

The video’s caption states: “Footage shows presidential nominee Hillary Clinton wobble unsteadily and appear to faint before being lifted into her vehicle”. 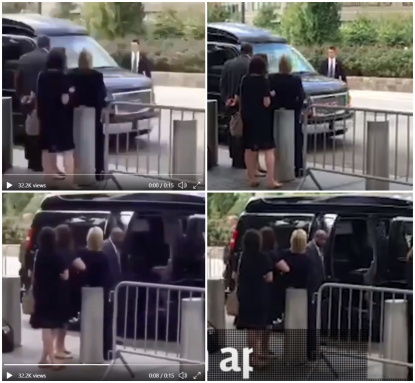 The same video of Clinton was also published in 2016 by US media organisations, including CNN here and ABC News here.

Clinton, who had been attending at memorial event at New York’s Ground Zero, was subsequently diagnosed with pneumonia, AFP reported here on September 12, 2016.