A video has been shared thousands of times in multiple posts on Facebook alongside a claim that it shows bodies of Mexican COVID-19 victims being dumped in the sea from a helicopter. The claim is false; the video has circulated since 2018 about a synchronised skydive in Russia.

The video was published here on Facebook on June 21, 2020. It was shared more than 4,700 times before it was deleted.

The 18-second clip shows a group of people jumping out of a helicopter.

The Tamil-language caption translates to English as: “Mexico is throwing those who died of Covid-19 in mid sea.” 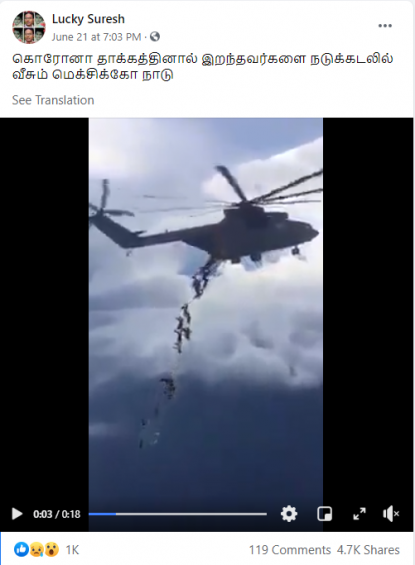 A reverse image search on Google using keyframes extracted with InVID-WeVerify, a digital verification tool, found the same video published here on Imgur, on July 25, 2018. The post predates the COVID-19 pandemic by at least one year.

The video's title reads: “Skydiving off the largest helicopter in use today, the Mi-26’”.

Mi-26 is a Russia-manufactured heavy cargo helicopter used in both combat and civilian operations.

Below is a screenshot comparison between the video in the misleading post (L) and the Imgur video (R): 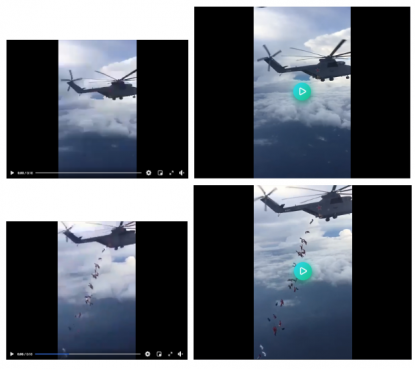 The same video was also uploaded here on OK.ru, a Russian social media site, on December 19, 2018. The clip was shared by an account created in the name of Aerograd Kolomna, which corresponds with a parachuting centre based in the Russian city of Kolomna.

According to this press release published by the parachuting company on July 16, 2018, a synchronised skydive was staged in a bid to set a world record in paradiving.

Several other videos published on Aerograd Kolomna's Facebook page show similar paradiving activities, including this one.

This report by Indian fact check site BOOM also debunked the claim in the misleading posts.