A video of a fire has been viewed hundreds of thousands of times in multiple posts on Facebook alongside a claim it shows wildfires burning in the US state of California in September 2020. The claim is misleading; this video has circulated online since December 2017 in reports about a wildfire in Los Angeles. 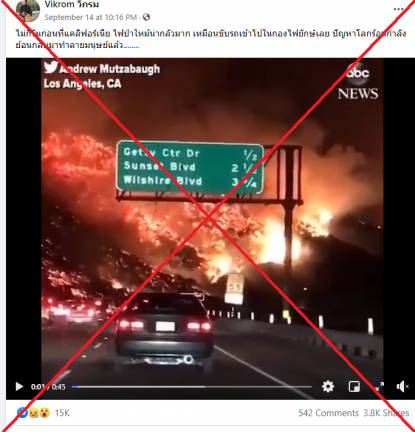 The 45-second video, which appears to have been filmed inside a moving vehicle on a highway, shows a raging fire in the distance.

The post’s Thai-language caption translates to English as: “The last few days in California, the forest fires are very scary. It's like driving a car into a giant fire. Global warming is a big problem that will hurt people.”

West Coast states in the US have seen record-breaking fires in 2020, burning through almost five million acres as of September 14, 2020. Here is an AFP report on the wildfires.

The same video was also published on Facebook here and here alongside a similar claim.

A combined reverse image and keyword search on Google found the same video published here on the website of US television network ABC News on December 7, 2017.

Getty Center is an art museum located near Interstate 405, a major highway in California.

Using a road sign seen in the video in the misleading post, AFP located the highway here on Google Maps.

Below is a screenshot comparison of a keyframe in the video (L) and the highway on Google Street View (R) : 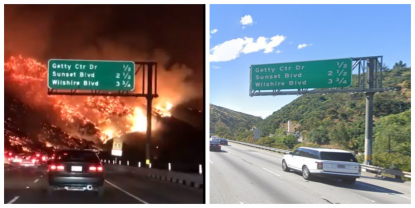