A video has been viewed tens of thousands of times in multiple posts on Facebook, Twitter, Instagram and YouTube in early January 2021 alongside a claim it shows Chinese tech billionaire Jack Ma repairing an air conditioning unit in Malaysia. The posts circulated online as it was reported Ma had not been seen in public for months. The claim is false: the video has circulated online since at least 2018 in reports about a "Jack Ma lookalike". Ma re-emerged at an event in rural China on January 20, 2021.

The 10-second clip shows a man sitting on top of an air conditioning unit, appearing to repair it. The caption reads: “Jack Ma found in Puchong”.

Jack Ma is one of Asia's richest people with a fortune estimated at around $58 billion. He founded popular Chinese e-commerce platform, Alibaba. 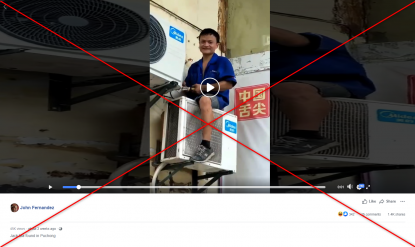 The posts circulated online after Ma disappeared from the public eye for three months. The tech billionaire was hauled in front of regulators for an October speech critical of China's financial system, AFP reported here.

In late January 2021, Ma made his first public appearance since November, ending weeks of speculation as to his whereabouts. A video clip released by Chinese news outlets on January 20, 2021 showed him giving a speech to rural teachers as part of an awards ceremony organised by his charity.

A spokesperson for the Jack Ma Foundation, his charitable arm, confirmed he participated in the online ceremony.

A reverse image search of the keyframes from the video obtained using digital verification tool InVID-WeVerify found the clip has circulated online since at least 2018.

It was published in this report by Taiwanese online media ETtoday on July 4, 2018.

“Exactly a clone! ‘Jack Ma lookalike’ climbs windows to repair air-conditioners. How can he just be a electrician with that face?” the Chinese-language headline reads.

Below is a screenshot comparison of the video in the misleading posts (L) and the ETToday article (R): 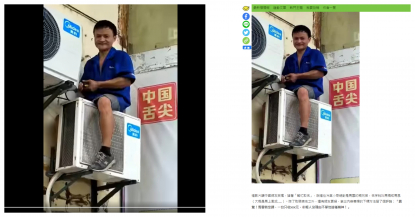 The Chinese-language report translates partly as: “Recently there's a viral video from mainland China which shows 'Jack Ma' sitting on top of an air conditioner doing his repair work. He looks hardworking but a bit shy. No matter how closer you check...this is pretty much a clone!”

The video in the article was shared here on YouTube on July 1, 2018.

The video's Chinese-language title translates to English as: "Haha same face but different fate! Both look like Jack Ma, however, one is the boss and the other's repairing air conditioners. Do you think they look like each other?"

AFP previously debunked a false claim that a photo circulating online showed Ma as a child.