A video showing a structure destroyed by heavy rain and strong winds has been viewed hundreds of thousands of times alongside a claim it was captured in the Dugha district of India’s West Bengal state during Cyclone Amphan. The claim is false; this video has circulated online since at least May 2019 about damage caused by Cyclone Fani in Bhubaneswar, a city in the east Indian state of Odisha. 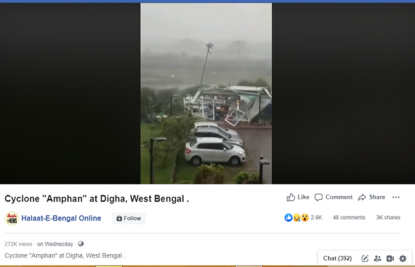 Digha is a coastal town in the east Indian state of West Bengal.

Cyclone Amphan made landfall in West Bengal on 20 May, 2020, killing at least 72 in the state and causing much structural damage.

A reverse image search of keyframes extracted from the video in the misleading post using InVID-WeVerify, a digital verification tool, found the same clip published in this May 3, 2019 report by the Indian newspaper The Economic Times. 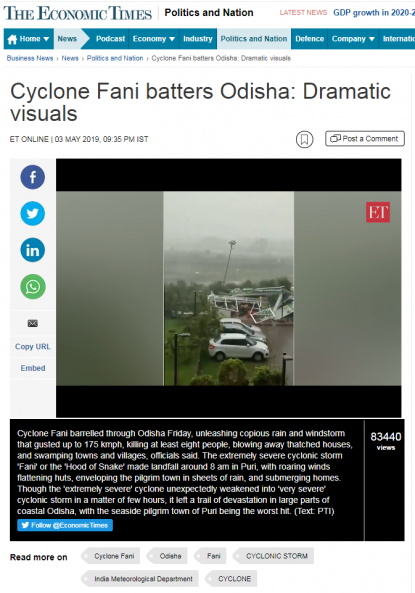 A screenshot of The Economic Times article published in May 2019

“The extremely severe cyclonic storm 'Fani' or the 'Hood of Snake' made landfall around 8 am in Puri, with roaring winds flattening huts, enveloping the pilgrim town in sheets of rain, and submerging homes.”

The same video was also published on The Economic Times’ official YouTube channel here on May 3, 2019.

Below is a screenshot comparison of the video in the misleading post (L) and The Economic Times’ video (R): 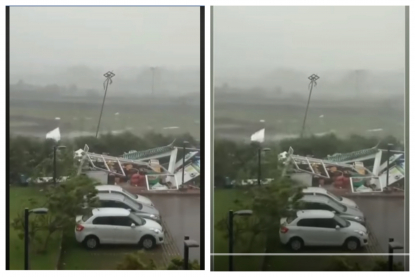 Longer versions of the video in the misleading posts have also been shared here, here and here on YouTube dated May 3 and May 4, 2019, alongside descriptions that state the clip shows damage caused by Cyclone Fani.

Cyclone Fani was a major tropical cyclone that hit India and Bangladesh in May 2019. Here is an AFP report on the disaster.