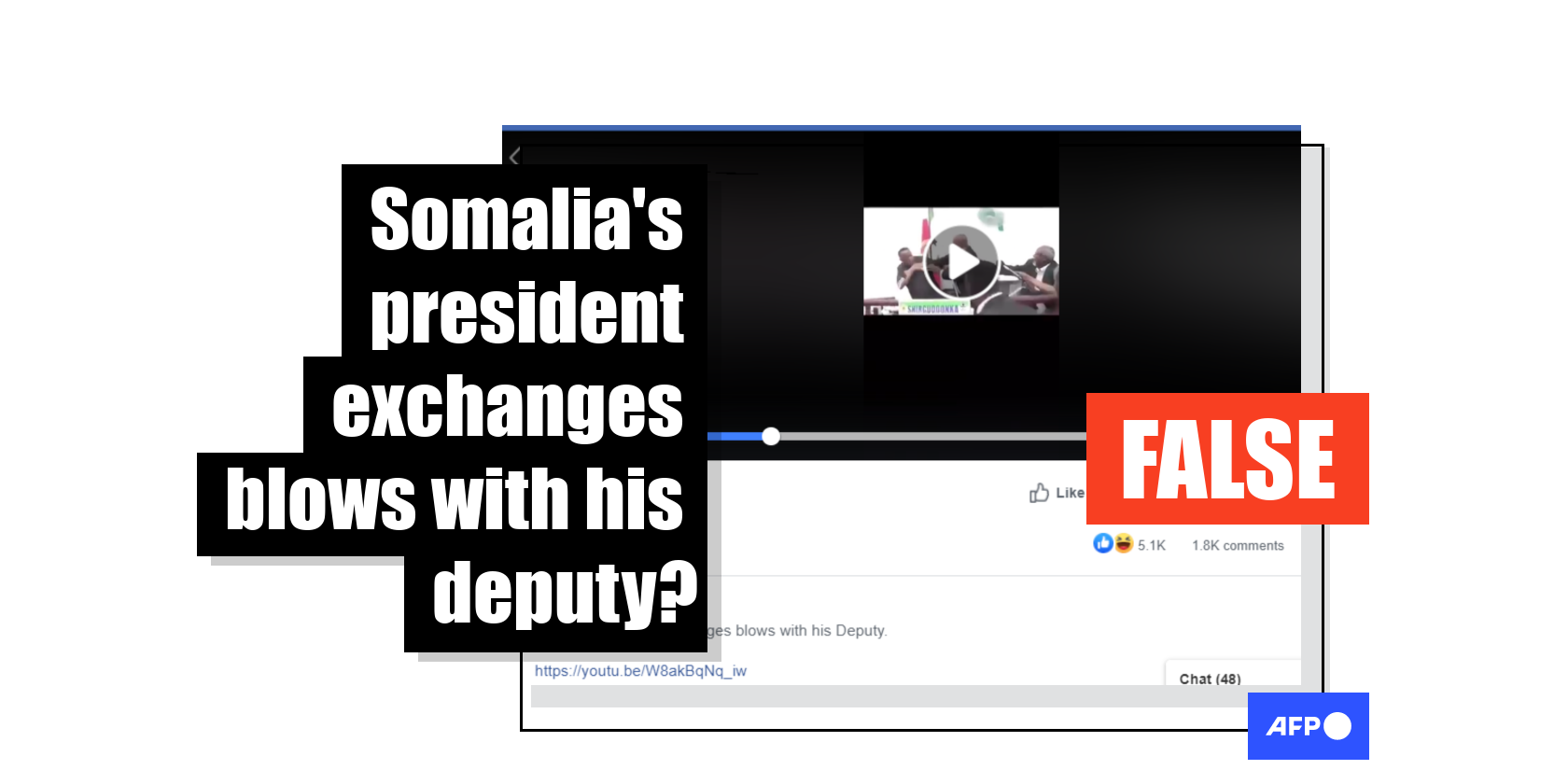 A video viewed thousands of times on social media claims to show a violent altercation between the president of Somalia and his deputy during a press conference. The claim is false; the fight was actually between the speaker and deputy of the House of Representatives in Somaliland – not Somalia – and it took place in 2015.

Nairobi governor Mike Sonko shared the video in this post on Facebook with the caption “Somali President exchanges blows with his Deputy”. Since August 14, 2020, it has had more than 150,000 views, 2,000 shares and more than 1,500 comments.

Several other Facebook posts (here, here, here and here) made the same claims.

According to the reports, “the Somalia president suddenly stood up during a press conference and started punching his deputy”.

“It is not yet understood what led to the altercation because the two were holding hands and the next thing, fists were flying,” one of the articles reads.

Meanwhile, Facebook posts in French (here, here and here) claimed that the clash involved Somalia’s president and the speaker of the country’s national assembly.

However, all of these claims are false.

Video from Somaliland, not Somalia

A close look at the video reveals the words “shirgudoonka golaha wakiilada” written on a sign in front of one of the men’s seats. This is written in Somali -- a language that is spoken in both Somalia and Somaliland -- and translates to “the speaker of the House of Representatives”.

The flag that appears behind the two men is not Somalia’s, which features a white star on a blue background. It corresponds to the flag of Somaliland, a self-proclaimed state on the edge of the Horn of Africa, which gained independence from Somalia in 1991. Somaliland is not recognised by the international community.

Somali women wave their national flag in the capital Mogadishu (left), while British-based supporters of Somaliland wave their flag during a pro-independence rally outside Downing Street in London (AFP)

A search using the video verification tool WeVerify revealed that the clip is not recent. AFP Fact Check found stills from the video used in an article published in 2015 on the Aftahan News site, which covers news from Somaliland.

The article, written in Somali and published on September 12, 2015, described the video as showing “clashes (...) between the speaker and the deputy speaker of the House of Representatives of Somaliland Abdirahman Mohamed Abdillahi (Cirro) and Bashe Mohamed Farah”.

Farah (in a black shirt with short sleeves) succeeded Abdillahi in 2017.

“The altercation took place after an argument over a motion concerning the management of fuel tanks in the port of Berbera in Somaliland,” Mustafa Haji Abdinur, AFP’s correspondent in Somalia, told AFP Fact Check.

The president of the separatist state had initially hired a company to manage the fuel tanks, but parliament subsequently revoked his decision. Thirty-three lawmakers tabled a motion to reverse parliament’s decision, but Abdillahi, as the speaker of the house, ruled that the debate was closed.

Farah then took the microphone to announce that discussions could continue. From there, the fight broke out, according to Abdinur from AFP.