A video of a truck being blown onto its side during a storm has been viewed millions of times in Facebook, Twitter and YouTube posts which claim it shows Typhoon Hagibis hitting Japan in October 2019. The claim is false; the video has circulated since at least September 2018 in media reports about a truck being knocked over by high winds as Typhoon Jebi hit the Japanese city of Osaka.

The clip shows a truck being blown over by a powerful storm.

The video’s Thai language caption translates to English as: “Typhoon Hagibis tripped over a truck in a blink of an eye.” 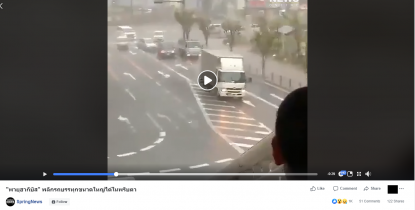 Typhoon Hagibis, Japan’s most powerful storm in decades, hit Japan on Saturday night, triggering landslides and floods. At least 74 people have died and dozens remain missing, according to this AFP report published on October 16, 2019.

The same video was also published here, here, here and here on Facebook; here on Twitter and here on YouTube with a similar claim in Thai language.

The claim is false; a reverse image search on Google for a screenshot of the video found that the footage has actually circulated online since September 2018, when Typhoon Jebi hit Japan.

A subsequent keyword search found the video in the misleading posts was previously published in this Twitter post on September 4, 2018. The 15-second clip has been viewed more than 1.8 million times.

The post’s caption states: "I went to Aeon, Dainichi branch, looked outside and then a truck fell. It was really awesome."

Below is a screenshot comparison of the video in the misleading posts (L) and the video published on Twitter (R):

The same video was also published on YouTube here on September 4, 2018.

The YouTube video’s Japanese-language title translates to English as: "The moment the typhoon turned over a truck. Osaka City, September 5 2018.”

The caption states: "I witnessed the moment a truck turned over from pedestrian bridge".

The September 2018 Twitter video was also published in this article by local news site Go-Guy NET on September 4, 2018.

The Japanese-language headline translates to English as: “[Moriguchi / Kadoma] Follow-up report of typhoon damage! You can watch the video of the decisive moment of a large truck rollover at Dainichi Aeon! It seems that there was a fire nearby.”

The video was filmed from a footbridge at the Aeon Mall Dainichi in Osaka as seen here on Google Street View.

Typhoon Jebi made landfall in Japan on September 4, 2018, according to this AFP report.