A video has been viewed thouands of times in multiple posts on Facebook and YouTube alongside a claim it shows Myanmar State Counsellor Aung San Suu Kyi delivering a speech about the upcoming 2020 general election. The claim is false; the video actually shows Suu Kyi speaking about the 2015 elections. 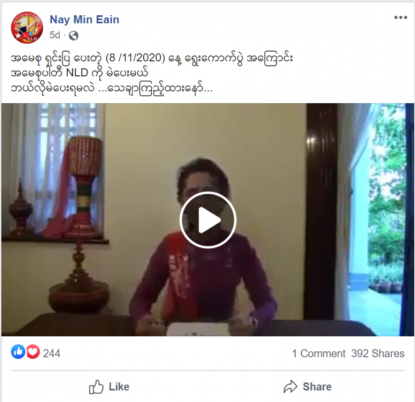 She says, in part: “I want all the citizens who are over the age of 18 to vote at the general election that will be held on November 8. This election is very important for all of us…I want to say please vote for the flag of our National League for Democracy (NLD) because I do not want you to confuse or make mistakes with the names of the candidates since there will be more than one candidate when you vote. I do not want to make a mistake. That is why I would like to request you to vote only on the flag of our NLD.”

She then goes on to give instructions on how to vote at a polling station.

Myanmar will hold its next general election on November 8, 2020. The polls are widely considered a test for the country's fledgling democratic government led by Suu Kyi. Here is an AFP report on the upcoming elections.

The video was also shared here on Facebook, and here and here on Youtube, alongside a similar claims.

A reverse image search found an identical video published here on Suu Kyi’s official Facebook page on October 1, 2015. The video is titled: “Daw Aung San Suu Kyi explained how to vote for the NLD in the upcoming elections.” 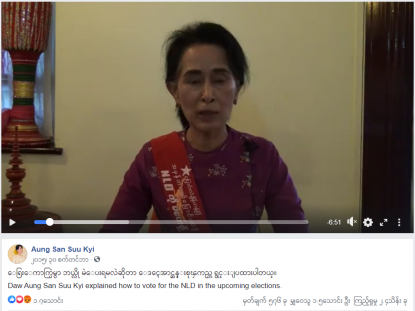 A screenshot of the Facebook video published on October 1, 2015

Below is a screenshot comparison of the video in the misleading post (L) and the video on the Suu Kyi Facebook page (R):

The 2015 Myanmar general election was held on November 8, 2015. Suu Kyi's NLD won a landslide victory. Here is an AFP report on the vote.