A video has been viewed thousands of times in multiple posts on Facebook and Twitter alongside a claim it shows police officers in a standoff with armed men on a street in the United States. This claim is false; the footage actually shows actors filming a scene for a movie in Brazil.

The video was published here in a pro-Hong Kong police Facebook group with more than 34,600 members on August 23, 2020. It has been shared more than 700 times. 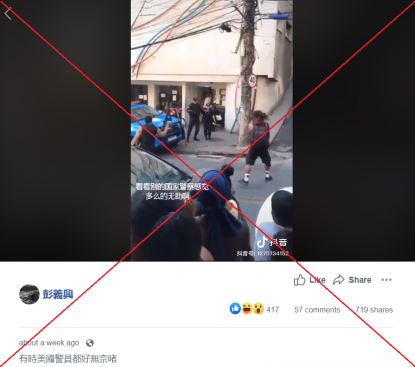 The simplified Chinese characters superimposed on the video translate to English as: “Look at the police officers in other countries / How helpless.” The logo for Douyin, the Chinese version of the video-sharing platform TikTok, can also be seen embedded in the video.

The original Douyin video was published here alongside a similar claim. It was also shared here on Facebook and here and here on Twitter alongside a claim it shows police in Brazil.

A reverse image search on Google using keyframes extracted from the video in the misleading post found this clip. It was published on the Instagram account for Brazilian actor Peter Brandão on August 20, 2020. It appears to show the same scene filmed from a different angle.

The post’s Portuguese-language caption translates to English as: “From yesterday, at the recording of Rocinha, toda história tem dois lados”.

“Rocinha, toda história tem dois lados” is an independent film in production in Rocinha, one of Brazil’s largest favelas.

Below are two screenshot comparisons of the video in the misleading posts (L) and the Instagram video (R): A closer analysis of the video in the misleading post also shows there are several camera crew standing on the street.

Below is a screenshot of the video’s four-second mark, which shows two crew members circled in red by AFP: 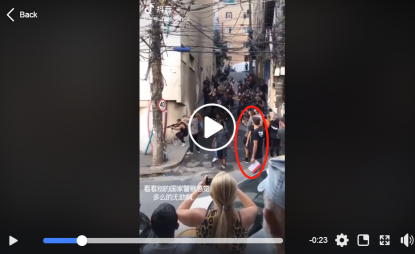 Screenshot of the video's four-second mark

In response to the misleading posts, BS Produções, the producers of “Rocinha, toda história tem dois lados”, told AFP by phone on August 21 that the video appears to have been captured during filming in Rocinha on August 19.

In response to the misleading posts, the secretariat for Rio de Janeiro State Military Police told AFP by email on August 21: “The audiovisual material in question is part of a recording of a film [in Rocinha]”.