Several photos of purported human limbs and human meat have been shared in multiple Facebook posts in Sri Lanka alongside claims that they show a thriving cannibalism market in foreign countries. This claim is false; the images in fact show a promotional event for a gory video game and various animal rights protests promoting a vegetarian diet.

The images were posted here on Facebook on January 21, 2019. They have since been shared at least 330 times. 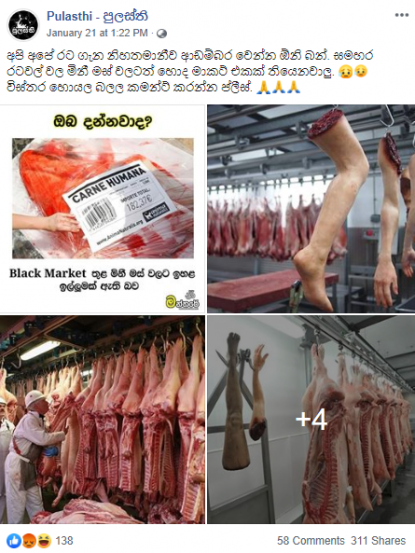 The Sinhala language caption translates to English as: “We must be humbly proud of our country. There is apparently a good market for human meat in certain countries. Please find out more and comment.”

The photos were also shared with a similar claim on Facebook here.

Reverse image searches on Google found that several of the photos were taken at various international animal rights demonstrations.

The lead image, which shows purported meat labeled “CARNE HUMANA,” actually shows a protest by activists in Barcelona, Spain in 2016. The photo was published here by Metro, a UK tabloid.

Below is a screenshot comparison of the photograph in the misleading post (L) and the image from the article (R):

One of the other photos was taken in 2018 at a protest organised by the Anti-Speciesist Action Collective, an Australian animal rights group. The photo can be seen on the organisation’s website here.

Below is a screenshot comparison of the photograph in the misleading post (L) and the image from the Anti-Speciesist Action Collective website (R):

A closer analysis at another of the images found that it was staged by People for the Ethical Treatment of Animals (PETA), a US-based animal rights groups. The organisation has put on several similar protests as part of its “Meat is Murder” demostrations, which feature blood covered volunteers lying in giant plastic wrapped meat trays.

Below is a screenshot of the image with the PETA logo circled in yellow by AFP: 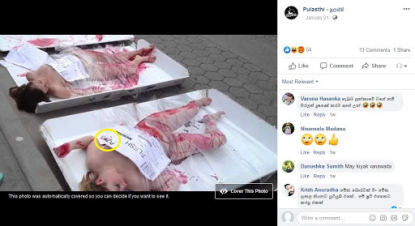 Screenshot of the image with the PETA logo circled in yellow by AFP.

Other reverse image search found that two of the other misleading photos were taken at a 2012 promotional event in London ahead of the release of the video game ‘Resident Evil 6’. The photos were featured on various blogs here and here.

Below are comparison screenshots between the images in the misleading posts (L) and the blog posts (R): 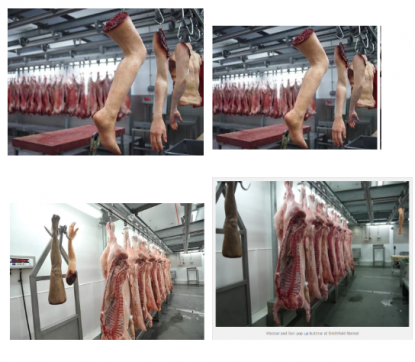 The image of a butcher shop shows a facility at the Smithfield market in London. It was featured in an article here and is credited to Getty Images.

Below is the screenshot comparison

The photo of red meat was found to be an image of beef published here by iStock, a stock image database owned by Getty Images. The photo’s caption reads: “Fresh ribeye steaks at the butcher shop.”

Below is the screenshot comparison