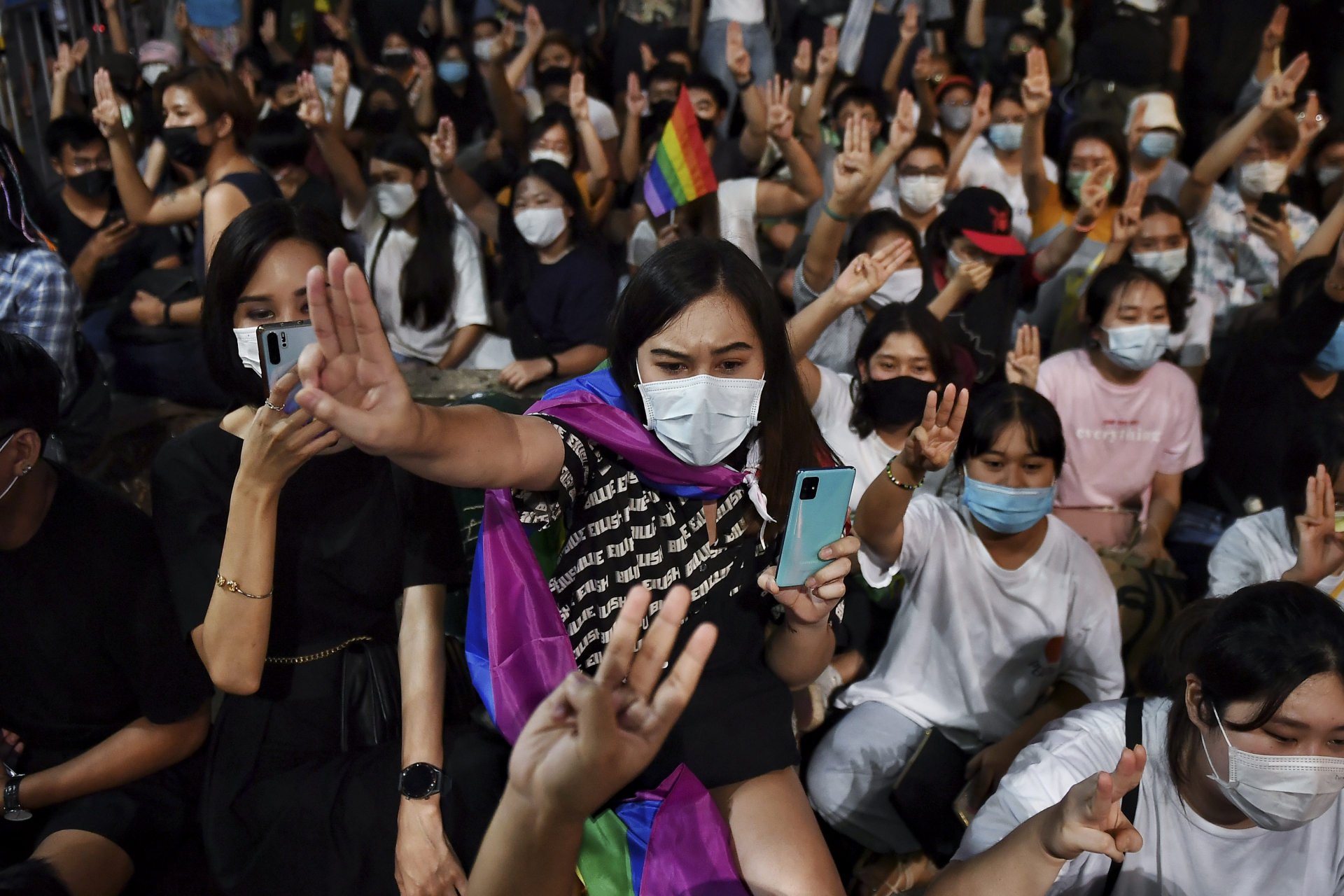 Thai LGBTQIA+ protesters and allies flash the three-fingered Hunger Games salute during an anti-government rally in front of Democracy Monument in Bangkok on July 25, 2020. (Photo by Lillian SUWANRUMPHA / AFP)

A photo collage has been shared repeatedly on Facebook and messaging app LINE alongside a claim that it shows a Thai student activist meeting the American ambassador to Thailand in September 2020 to plan further anti-government protests. The claim is false: both photos were posted online in June 2016 -- some four years before the 2020 anti-government protests in Thailand began.

The first and second photos, which are identical, show Thai student leader Parit “Penguin” Chiwarak and former US ambassador to Thailand, Glyn T. Davies. The third image shows the pair in a meeting. 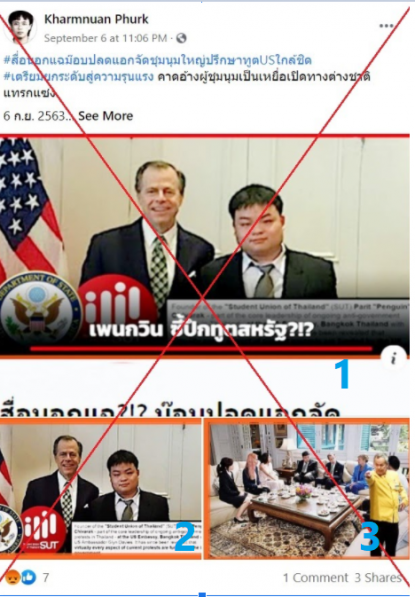 The post’s lengthy caption states in part: “Foreign media reveals Free People Movement consults the US ambassador closely, preparing to bring violence to the protests. Protests are expected to be the victim of foreign intervention.”

Free People, a movement launched by several student groups in Thailand in August 2020, has called for an overhaul of the government and a rewriting of the 2017 military-scripted constitution.

Since mid-July 2020, student-led groups have held near daily-protests against Premier Prayut Chan-O-Cha and his military-aligned administration, AFP reported here.

The same set of images, along with a similar claim, was also shared on Facebook here and here, in an online article here, and on messaging app LINE, as seen in the screenshot below: 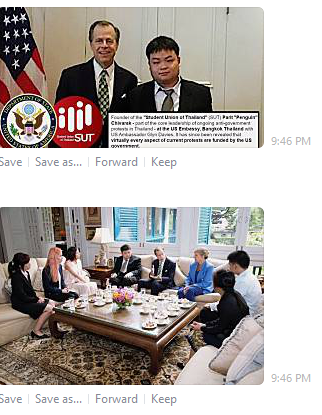 The photos were published online in 2016, more than four years prior to the 2020 anti-government protests in Thailand.

The former US ambassador to Thailand in the photos left his post in September 2018.

A reverse image search on Google found the first and second photo published in this Facebook post by Parit Chiwarak on June 2, 2016.

The post, which was geotagged to the US embassy in Bangkok, translates from Thai to English as: “Thank you Glyn Davies, the US Ambassador to Thailand and his wife, who gave me an honour and invited me for a roundtable discussion about education and the youth at the Ambassador's Residence on Wireless Road”.

Glyn T. Davies left his post as the US Ambassador to Thailand in September 2018, nearly two years before anti-government protests erupted in Thailand in July 2020.

He was succeeded by Michael George DeSombre, who remains in office.

A separate keyword search found the third photo published here on the verified Facebook account of the US embassy in Bangkok on June 3, 2016.

The caption of the Facebook reads: “On June 2, Ambassador and Mrs. Davies hosted a roundtable discussion with youth who are recognized as leaders by their peers and in their community for their advocacy and activism.”

Below is a screenshot comparison of the image in the misleading post (L) and the photo from the 2016 Facebook post from the US embassy in Bangkok (R):

In response to an AFP inquiry, Nicole Fox, a spokesperson for the US embassy in Bangkok, said former US ambassador to Thailand Glyn T. Davies did meet Parit Chiwarak during a meeting with "a group of students and young people" in 2016.

“Ambassadors and Embassy personnel regularly meet with a broad cross-section of Thai nationals and such meetings do not imply endorsement of any views," Fox told AFP.

“As friends of Thailand, we encourage all sides to continue to act with respect and restraint and engage in constructive dialogue on how to move the country forward.  The United States does not favor or support any particular individual or political party in Thailand.”

In addition, the embassy issued this statement on September 11, 2020, refuting the claim. 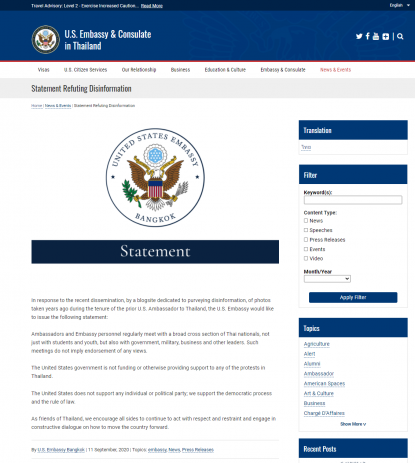 A screenshot taken on September 11, 2020, of a statement from US embassy in Bangkok

In a telephone conversation with AFP on September 9, 2020, Parit Chiwarak said: “Those photos were taken four years ago when I was still a high school student. The former US ambassador invited me to join a roundtable discussion about education.”

He added that students from other schools were also present at the meeting.