These photos show a small house in Vietnam

Multiple Facebook posts have shared photos they claim show a house built on the smallest plot of land in Sri Lanka. However, the claim is false: the images in fact show a house in Vietnam.

The images and the claim were shared on Facebook here on March 12, 2021.

“This house has the most space despite being built on the smallest land plot in Sri Lanka,” reads the Sinhala-language claim. 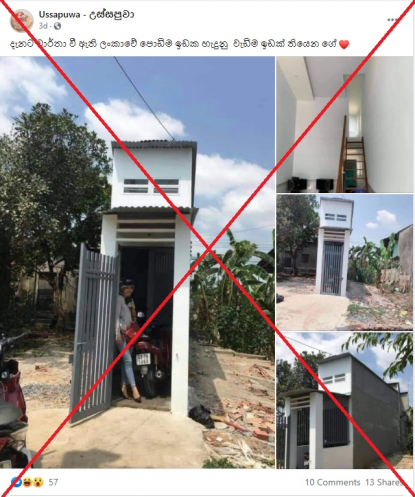 The photos were also shared alongside similar claims on Facebook here.

However, the claim is false; the images in fact show a house located in Vietnam's Dong Nai Province.

A reverse image search on Google found the photos published here a news report by a digital news website Elite Readers on March 10, 2019.

The report, titled “Woman Shows Off Her Unique Tiny House Extremely Small Lot,” reads in a part: “although the caption of the post was in the Filipino language, netizens pointed out that the house is not in the Philippines, but in Vietnam.”

The motorbike’s number plate seen in the photos also corresponds to those used in Vietnam, as seen here in an AFP photo.

Below is a screenshot comparison between the image in the misleading Facebook post (L) and the AFP photo (R).

Screenshot comparison between the image in the misleading Facebook post (L) and the AFP photo (R), with number plates circled in red by AFP

Number plates for each province in Vietnam have a different area code.

The number 60 that appears on the plate in the misleading Facebook post indicates that it is from Vietnam’s Dong Nai Province. The numbers and their corresponding provinces can be seen here.

Part of the Vietnamese-language report translates to English as: “This house was built in Dong Nai, with an area of 1.3x10m and belongs to a pretty young girl.”

Below is a screenshot comparison of the images shared in the misleading post (L) and the article published in Soha (R): 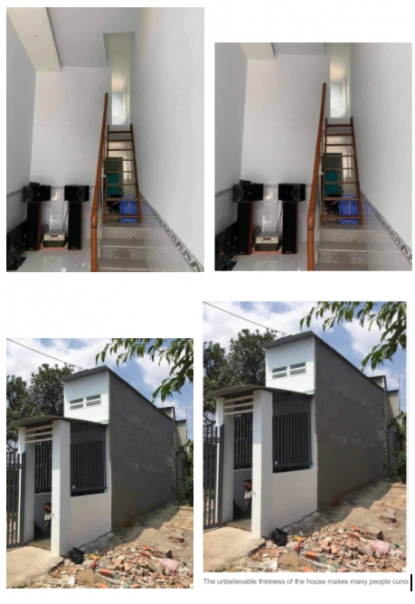