A collage of three photos showing long queues of vehicles has been shared thousands of times in multiple Facebook and Twitter posts in September 2020 alongside a claim that the convoys consist of members of the Rajput caste, who were travelling to the Indian state of Maharashtra to show support for Bollywood actress Kangana Ranaut. The claim is false; these photos show different convoys at past events unrelated to Bollywood in the states of Gujarat and Rajasthan. 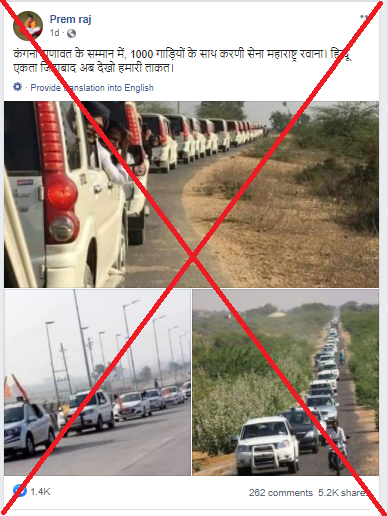 The post’s Hindi-language caption translates as: “Karni Sena has left for Maharashtra in a thousand vehicles in the honour of Kangana Ranaut. Long live Hindu unity. Now you see our power.”

Karni Sena is an organisation established in 2006 to demand caste-based reservation in education and government jobs for the Rajput caste, which is primarily based in the north Indian states of Rajasthan, Gujarat and Madhya Pradesh. The group made headline in 2018 for leading widespread protests against a Bollywood film they said distorted the tale about a legendary Hindu queen, AFP reported here.

Kangana Ranaut is a famous Bollywood actress and a vocal critic of the Maharashtra state government, as reported here by the Hindustan Times.

However, the claim is false; reverse image searches on Google and Yandex found that the photos were published in past reports about unrelated events in the states of Gujarat and Rajasthan.

The first photo was published on Twitter here on March 1, 2017.

Below is a screenshot comparison of the first photo in the misleading posts (L) and the 2017 Twitter photo (R):

The first photo was also published alongside various claims in March 2017 on Twitter here and here and on Facebook here.

The second photo was published here on the Facebook page of Karni Sena on December 22, 2019.

Below is a screenshot comparison of the second photo in the misleading posts (L) and the 2019 Facebook photo (R):

The third photo was published on Twitter here on March 29, 2016, in a post about the motorcade of Indian politician Sachin Pilot travelling in Rajasthan.

The photo was also shared alongside the same claim in March 2016 on Twitter here and here on the Facebook page of the Barmer, Rajasthan, branch of the Indian National Congress, the political party of Sachin Pilot.

Below is a screenshot comparison of the third photo in the misleading posts (L) and the 2016 motorcade photo (R): 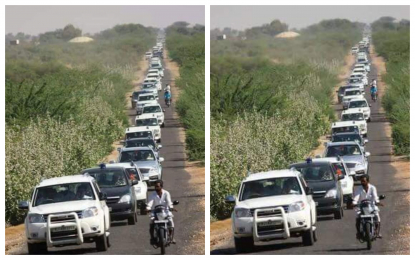