Multiple photos showing the aftermath of a plane crash have been shared hundreds of times on Facebook in June 2020 alongside a claim that they show a Myanmar military aircraft that recently crashed near Rakhine state in western Myanmar. The claim is false; the photos in fact show a passenger plane that crash-landed in the southern Shan state, more than 300 km northeast of Rakhine.

The photos were published here on Facebook on June 8 and have been shared more than 800 times since.

The Burmese caption of the post translates as: “A plane carrying heavy military weapons leading to Rakhine State crashed and burnt down to ashes. The military officers in the plane shot each other.” 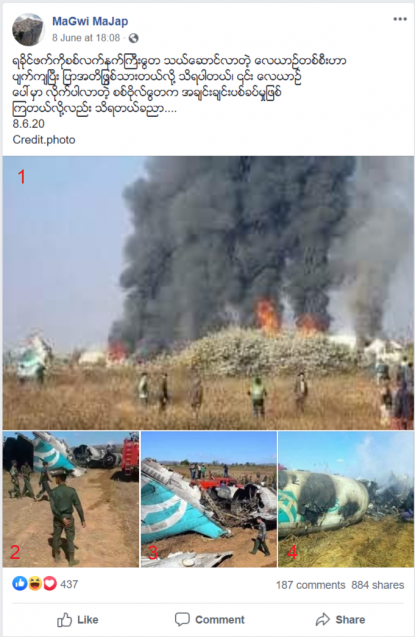 A screenshot taken on June 11, 2020, of the misleading post by Facebook user MaGwi MaJap with photos numbered by AFP

The photos were also shared alongside a similar claim here on Facebook on June 9.

A keyword search on Google found the third photo in the misleading post was published in this report by Burmese newspaper The Myanmar Times on December 31, 2012. 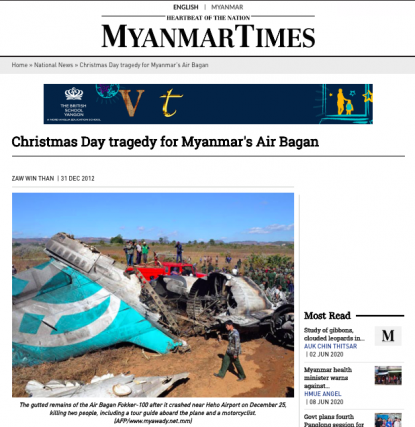 Air Bagan is a Burmese airliner headquartered in Yangon; Heho, a town located in Shan state, is more than 300 km northeast of Rakhine, according to mapping tool Map Developers.

The photo was published in The Myanmar Times report with an AFP byline. A subsequent reverse image search found three of four photos in the misleading post were credited to AFP, and one of them published by Reuters.

The first photo was published here on AFP archive on December 15, 2012.

Below is a screenshot comparison of the first photo in the misleading post (L) and the photo credited to AFP (R):

The caption for the photo states: “Soldiers stand at the crash site of a Air Bagan plane in Heho December 25, 2020. REUTERS/Stringer".

Below is a screenshot comparison of the second photo in the misleading post (L) and the Reuters photo (R):

The third photo shows rescue personnel working on the crash site near Heho airport, according to the description here on AFP’s archive. The photo was distributed by AFP and released by the website for Burmese newspaper The Myawady Daily.

Below is a screenshot comparison of the third photo in the misleading post (L) and the photo credited to AFP (R):

The fourth photo, published by AFP here, also shows rescuers on the scene of the Air Bagan crash on December 25, 2012.

Below is a screenshot comparison of the fourth photo in the misleading post (L) and the AFP photo (R):