Several photos have been shared thousands of times in multiple posts on Facebook alongside a claim they show users of "yaba", a methamphetamine commonly found in southeast Asia. The claim, however, is misleading; the photos have circulated in reports about health conditions unrelated to drug use.

The photos were published on Facebook here on August 13, 2020. The post has been shared more than 1,600 times. 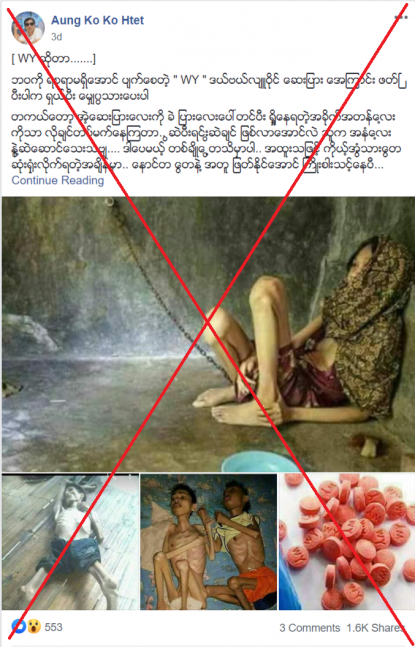 The post’s Burmese-language title translates to English as: [WY is.....] Please share after reading about ‘WY’ or Yaba tablets that can ruin a life badly.”

The post adds: “Its smell attracts users to use it over and over again. But some people may wake up to the drug after having lost his or her tooth by using it. You should stop being addicted to the drug with a lot of regrets.”

"Yaba" referes to methamphetamine tablets “largely available among the low- priced segment of drug markets in East and South-East Asia,” the United Nations Office on Drugs and Crime explains here.

The photos were also published alongside a similar claim on Facebook here and here.

A reverse Google image search found the first photo of a woman chained in a room was published here in a Human Rights Watch report on March 20, 2016.

The report is titled: “Living in Hell: Abuses against People with Psychosocial Disabilities in Indonesia”. 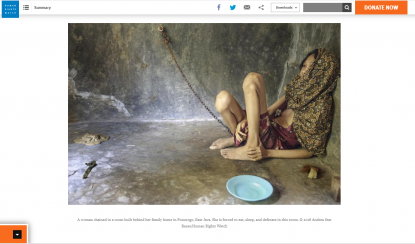 The photo’s caption reads: “A woman chained in a room built behind her family in Ponorogo, East Java. She is forced to eat, sleep, and defecate in this room. @ 2016 Andrea Star Reeese/Human Rights Watch”.

Below is a screenshot comparison of the photo in the misleading post (L) and the screenshot in the HRW report (R):

Another reverse Google image and keyword search found the photo of two men was published here by Goosiam News, a local media outlet in Thailand. 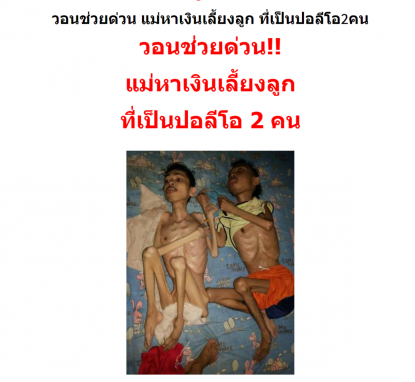 The Thai-language post states that the men are brothers who were born with polio and “at the age of seven, they weren’t able to walk.”

The report adds: “They couldn't help themselves anymore. Both of them live with their parents, sister and younger brother. The mother only has one job to earn money.”

Below is a screenshot comparison of the photo in the misleading post (L) and the screenshot in the Goosiam News report (R):

The photo of the two brothers in Thailand was also published here in a report by the Association of Persons with Physical Disability International on November 2, 2015.

A reverse image search also found that the photo of a seated woman, which was published in the additional post here, is also unrelated to drug use.

The photo was published in 2016 here on KKNES.CC, Chinese-language blog. The article's headline translates in English as: “Life in a cage, the tragic fate of Indonesian patients with mental health problems".

Andrea Star Reese, a US-based documentary photojournalist, said she took the photo at the Yayasan Galuh Foundation in Bekasi, Indonesia on November 28, 2012. The centre is a rehabilitation centre for people with mental health problems.

“The woman depicted was not a drug user," Reese told AFP on August 21, 2020. The people around her were not being held due to drugs. The residents of Galuh were either brought to the [treatment centre] by family due to atypical behavior or they were brought by police who found them wandering the street. I did not give my permission to any publication or private person to use that photograph."

Below is a screenshot comparison of the photo in the misleading post (L) and the photo provided by Andrea Star Reese (R):

AFP was unable to locate the origins of the fourth photo of the man lying on the floor.