Two photos have been shared hundreds of times in multiple Facebook and Twitter posts which claim it shows Myanmar’s Religious Affairs Minister attending a large gathering to mark the Prophet Mohammed’s birthday in Yangon, flouting social distancing regulations during the coronavirus pandemic. However, the claim is false; these photos predate the Covid-19 pandemic and have circulated in reports since November 2019 about the minister marking the Prophet Mohammed’s birthday. 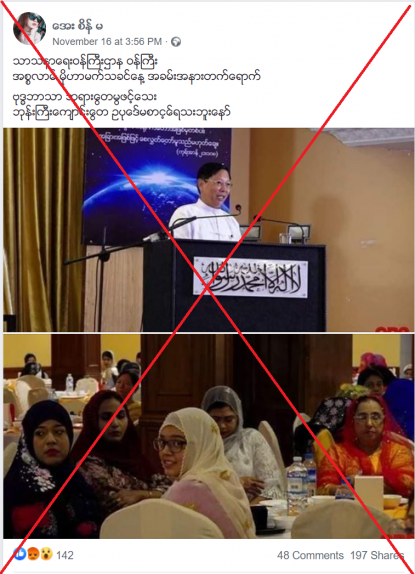 The post’s Burmese-language caption translates to English as: “Minister of Religious Affairs attended Islamic Muhammad's Day celebration. #Buddhist pagodas are not open yet #Buddhist monasteries are not allowed to practice fasting yet. #Credit”

As per this statement released by Myanmar's Ministry of Health and Sports on November 19, 2020, people are advised to “stay at home as much as possible” as part of the country's efforts to curb the spread of the novel coronavirus.

The release reads, in part: “In order not to get infected the coronavirus, we would like to request the public not to travel if there is no important matter, avoid public gathering and stay at home as much as possible by abiding the rules released by the Myanmar Ministry of Health and Sports.”

Posted by Ministry of Health and Sports, Myanmar on Thursday, November 19, 2020

The photos were also shared in this post on November 16, 2020 alongside a similar claim.

The first photo was also published here with a similar claim on Twitter.

A reverse Google image search found the photos were published here by Myanmar-based media site One News Myanmar on November 16, 2019.

Screenshot of One News Myanmar’s report

The report's Burmese title states: “The Ministry of Religious Affairs urges loyalty to the country by following religious teachings”.

It reads, in part: “Thura U Aung Ko, Union Minister of Religious Affairs and Culture said that every citizen should follow the teachings of his or her religion and be loyal to the country. He made the remarks at the opening ceremony of the Prophet Mohammed's Birthday at the M3 Food Center in Rangoon on the morning of 16 November (2019).”

Below are screenshot comparisons of the photos in the misleading post (L) and the One News Myanmar report (R):

Myanmar government media also reported here and here that the Minister joined the event in 2019.