A collage of photos showing men blackening Hindi and English text on traffic signs has been shared hundreds of times in multiple posts on Facebook and Twitter in January 2021 alongside a claim it shows Sikh farmers protesting against the Hindi language. The claim is misleading; the photos have circulated since 2017 in reports about activists in the Indian state of Punjab showing their support for the Punjabi language.

The collage was published on Facebook here on January 9, 2021. 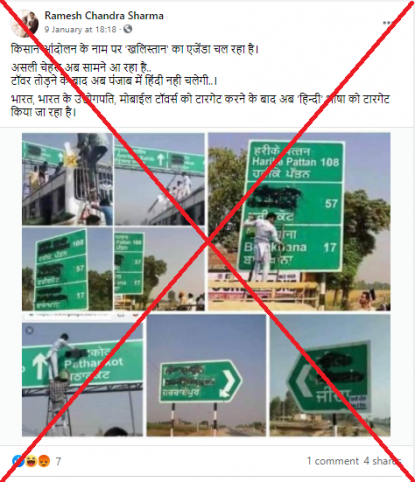 The post’s Hindi-language caption translates to English as: “They are pursuing Khalistani agenda under the pretext of farmers protest. The true face [of the protests] is now being revealed. They demolished telecommunication towers and are now opposing Hindi language in Punjab. They are now speaking against Hindi language after having spoken out against India, Indian and Indian industrialists.”

The caption refers to the vandalisation of mobile network towers, allegedly by protesting farmers, in the northern states of Punjab and Haryana, as reported here by the Hindustan Times.

A Google keyword search found a similar set of images was published on YouTube here by India TV news on October 25, 2017, almost three years before the Indian farmers’ protest began.

Below is a screenshot comparison of the images shared in the misleading Facebook post (top) and the corresponding images published in 2017 (bottom):

The Hindustan Times also published a report on the demonstration here on November 7, 2017. The report states two Punjabi Sikh protesters were arrested.